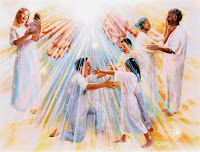 Fourth, the rapture will be a reunion. The concern of Paul's Thessalonian converts that initiated his discussion on the rapture is recorded in 1 Thessalonians 4:13. This verse says, "But we do not want you to be uninformed, brethren, about those who are asleep, so that you will not grieve as do the rest who have no hope." Apparently, upon planting the church in Thessalonica, Paul had taught the new converts about the rapture. However, his sudden departure from Thessalonica (Acts 17:1-9) left him no opportunity to explain the full ramifications and implications of this doctrine. Thus, when some of the Thessalonian Christians began to die, either due to natural causes or persecution, the question that likely remained in the minds of the living Thessalonian believers was whether those who had died before the Lord’s return in the clouds would miss the rapture?

Paul explains the reason that the Thessalonians made this inquiry was that they were "uninformed" (1 Thess. 4:13). The Greek word translated "uninformed" is agnoeō. Because "a" is a negation and "gnōsis" means "knowledge," agnoeō literally means "without knowledge." From this Greek word agnoeō, we get the English words "agnostic," "ignorant," or "ignoramus." Calling someone ignorant is not necessarily an insult. Ignorance does not mean stupidity, or the inability to grasp truth. Rather, it simply refers to someone who is not yet fully informed. The reason that the Thessalonians were asking the question is because they did not have all of the facts. Paul, as the revealer of new doctrine for the Church-Age, had thus far no opportunity to explain to them how the rapture doctrine related or applied to Christians who had already died. The Thessalonians could not consult the New Testament to discover this reality, since the New Testament itself was just being initially formulated.

"For if we believe that Jesus died and rose again, even so God will bring with Him those who have fallen asleep in Jesus. For this we say to you by the word of the Lord, that we who are alive and remain until the coming of the Lord, will not precede those who have fallen asleep. For the Lord Himself will descend from heaven with a shout, with the voice of the archangel and with the trumpet of God, and the dead in Christ will rise first. Then we who are alive and remain will be caught up together with them in the clouds to meet the Lord in the air, and so we shall always be with the Lord."

Interestingly, Paul never tells the Thessalonians not to grieve over the loss of their deceased, believing loved ones. Grief over such a loss is normal and natural and should never be artificially stifled or suppressed. Paul instead says to them and to us to "not grieve as do the rest who have no hope" (1 Thess. 4:13). In other words, do not grieve as if you do not have the hope of ever seeing your deceased loved ones in Christ again. Do not grieve like an unbeliever does who has no hope of ever seeing a deceased loved one again after death. Do not grieve as the world does. Such a perspective explains why Paul concludes his discussion on the rapture to the Thessalonian believers with the phrase, "Therefore comfort one another with these words" (1 Thess. 4:18).

In sum, not only is the rapture an important doctrine, an event that is distinct from the Second Advent of Christ, and an event that will involve the catching up of every believer to meet the Lord in the air, but the rapture will also be a reunion between living and deceased believers. Therefore, this reunion element of the rapture doctrine furnishes a tremendous comfort to those living believers who have lost a loved one in Christ through death.