Greece on Edge of Economic Collapse and Civil War—Will Contagion Spread to E.U. and U.S.?

Greece is on the verge of economic collapse and civil war, according to top leaders inside Greece and the European Union. Decisions made by Greek leaders and the Greek public in the coming days and weeks could lead to catastrophic results. What’s more, experts are worried the economic and social contagion unleashed by a Greek implosion, should it happen, could spread throughout the European Union, the U.S., and around the world in our highly interdependent global economy.

Greece is staggering under a crushing amount of public debt. The politicians and the public is addicted to runaway government spending. But the Greek public is resisting the massive budget cuts and other reforms needed to avoid an implosion. It is resisting the reforms the EU leadership is requiring in order for Greece to receive new infusions of EU emergency funding and access to emergency loans. Greek leaders are, instead, seriously considering quitting the Eurozone system in order to avoid the austerity measures the EU leaders—led by German Chancellor Angela Merkel—are insisting upon. 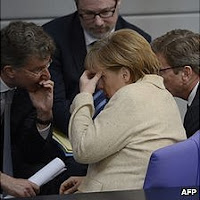 But leaving the Eurozone would likely make things far worse, cutting off or severely limiting Greek access to the capital markets and possibly leading to sky high interest rates, hyperinflation, massive business failures and soaring unemployment. If Greece leaves the Euro system, it would also severely impact the rest of Europe. Banks who have large investments in Greece fear they might never be repaid, which would threaten the health of those banks. Bank officials around the world would, in turn, jack up interest rates for other struggling European countries—including Spain, Italy and Portugal, among others—fearing they, too, might bail on the legal and financial agreements that are party of the E.U. treaty and making them higher risks of defaulting on their loans. Businesses throughout Europe could then struggle to get access to capital, potentially leading to a horrific cycle of further business failures and skyrocketing unemployment. Given that Europe is the largest trading partner with the United States, and the fact that many American banks have European exposure, the American economy could also be severely impacted.

If this were not all serious enough, the Greek crisis offers a warning to American policymakers who are also addicted to overspending and massive debt. The U.S. is already $15 trillion-plus in debt, with another $65 trillion in unfunded liabilities coming due. If we don’t make dramatic course corrections quickly, we may find ourselves on the financial equivalent of the Titanic, unable to avoid hitting the debt iceberg straight ahead of us before it’s too late.