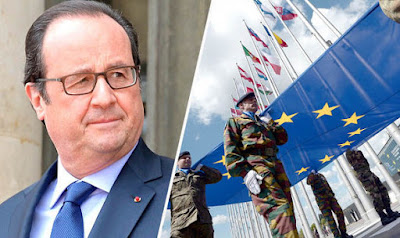 (EXPRESS)—French president Francois Hollande is touring EU capitals this week to push the vision of a 'European army'.

After a trip to Portugal yesterday, France's socialist leader will visit Ireland tomorrow to gather support for greater EU integration ahead of a key summit in September.

Britain is not invited to the meeting in Bratislava, Slovakia, later this summer following last month's Brexit vote.

The gathering is being billed as a chance for the remaining 27 EU member states to respond to the UK's exit by refocusing efforts on deepening ties between themselves.

Mr Hollande is using his trips this week to "insist on security and defence aspects" being a major topic of the summit said French officials, according to the EurActiv France website.

Speaking in Lisbon, he said: "We are up against challenges and that of terrorism is without doubt one of the largest ones."...

The day before the Nice atrocity last week, Mr Hollande had announced a proposal to strengthen European defence policy.

He said: "I note that our German friends are also prepared to be involved. We will therefore be able to launch this initiative together".

The plans aim to increase the EU's ability "to make [military] commitments beyond its borders and to strengthen security in our partner countries and neighbours", Mr Hollande said in a speech.

Earlier the same day German defence minister Ursula von der Leyen called for Brussels to use Brexit as an opportunity to press ahead with greater military cooperation between member states....