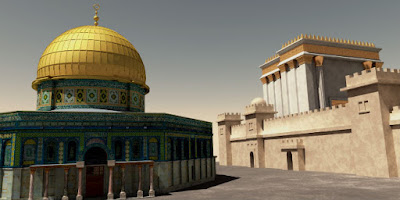 Third Temple envisioned alongside the Dome of the Rock. (Photo via Shutterstock)

(BIN)—Israel's Chief Ashkenazi Rabbi David Lau joined a growing list of Israeli politicians who are calling for the Third Temple to be built on the Temple Mount in Jerusalem. He suggested the Messianic vision could be realized without touching Muslim structures at the site by simply building a new structure alongside the existing Muslim buildings that stand on the site of the previous two Jewish Temples.

He expressed his vision citing the Prophet Isaiah.

My house shall be called a house of prayer for all peoples (Isaiah 56:7).

In an interview two weeks ago on the Knesset Channel, the Chief Rabbi said that, according to the measurements for the Temple described by the sages, the Third Temple would not take up the entire Temple Mount Compound and there would be plenty of room for "Jews, Christians, Muslims, everyone."

...The Chief Rabbi's remarkable statement indicates a significant change of mind for him. In October, Rabbi Lau signed a petition of over 100 rabbis, barring Jews from visiting the Temple Mount.

Rabbi Lau's statement comes just a few weeks after an unlikely series of political events led to Rabbi Yehuda Glick becoming the newest Likud Member of Knesset. Glick is a prominent advocate for equal rights for all faiths to pray on the Temple Mount....

The pro-Temple movement has been quietly growing in the government. Two years ago, acting foreign minister, Tzipi Hotovely said in a television interview that she dreams of seeing the Israeli flag fly over the Temple Mount, calling the site the "center of Israeli sovereignty." Her statement angered her boss, Netanyahu, who was busy assuring the world that Israel had no intent to change the status quo on the Temple Mount.

Three years ago, Uri Ariel, a member of the Knesset for The Jewish Home (HaBayit HaYehudi) and Minister of Agriculture and Rural Development, called for building the Third Temple on the Temple Mount. He made these statements while viewing archaeological digs of the Tabernacle in Shiloh.

"We've built a lot of synagogues," Afriel said, "But it's about time we built the real Temple".

Though his remarks were considered inflammatory and extremist at the time, as more public figures in Israel stand up for the Temple Mount, perhaps this will soon become the norm.