(THE BLAZE)—Christian persecution rose on every continent in the world throughout 2015, with North Korea listed as the most dangerous country to be a Bible-believer, according to a new report released by Open Doors USA, a group that works to combat global persecution.

Open Doors released its annual "World Watch List" report on Wednesday, ranking the top 50 countries "where it is most dangerous and difficult to be a Christian" during a morning event at the National Press Club.

The report found that the 10 worst nations are as follows (listed from most dangerous to least): North Korea, Iraq, Eritrea, Afghanistan, Syria, Pakistan, Somalia, Sudan, Iran and Libya. See the complete list of 50 below: 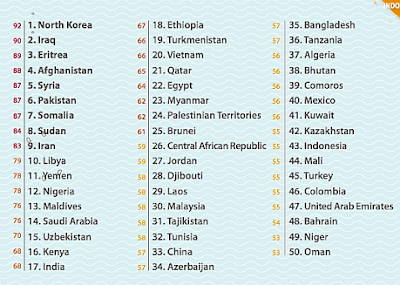 While last year's 2014 report showed that "Christians faced the worst persecution in modern history," the situation in 2015 was far worse, with Islamic extremism continuing to be the primary source behind increasing persecution.

In fact, Islamic extremism, according to the World Watch List, is the "lead generator of persecution for 35 out of the 50 nations" on its list....