The Inspiration, Inerrancy, and Authority of the Bible (Part 1)

Biblical inspiration may be defined as God's superintending of the human authors so that, using their own individual personalities (and even their writing styles), they composed and recorded without error His revelation to man in the words of the original autographs. Inspiration means that "the Holy Spirit of God superintended the human writers in the production of Scripture so that what they wrote was precisely what God wanted written."

When you break the doctrine of inspiration down to its essential elements, there are seven key factors:

The word inspiration literally means "God-breathed" in the Greek. And because Scripture is breathed out by God, it is true and inerrant. Consider the following syllogism:

As illustrated above, the inerrancy of Scripture can be inferred by premises that are themselves taught by Scripture. 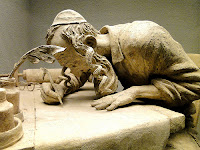 The Holy Spirit is the Agent of Inspiration

Second Peter 1:21 tells us that "prophecy came not in old time by the will of man: but holy men of God spake as they were moved by the Holy Ghost." The word moved in this verse literally means to be "borne along" or "carried along." Even though human beings were used in the process of writing down God's Word, they were all literally "borne along" by the Holy Spirit. The human wills of the authors were not the originators or the carriers of God's message....God did not permit the will of sinful man to divert, misdirect, or erroneously record His message. God moved and the prophet mouthed these truths; God revealed and man recorded His word.

Interestingly, the Greek word for "moved" in 2 Peter 1:21 is the same word found in Acts 27:15-17. The experienced sailors could not navigate the ship because the wind was so strong. The ship was being driven, directed, and carried about by the wind. This is similar to the Spirit's driving, directing, and carrying the human authors of the Bible as He wished. The word is a strong one, indicating the Spirit's complete superintendence of the human authors.