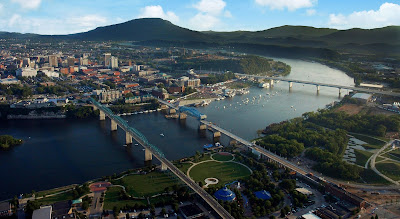 Chattanooga has once again claimed its title as the most Bible-minded city in America according to a new study.

(WTVC)—The American Bible Society says Chattanooga has re-taken the No. 1 spot in a newly released study ranking the nation's most Bible-minded cities.

After ranking No. 1 in 2014, Chattanooga lost its lead to Birmingham, Alabama, in 2015 but reclaimed the title this year, according to the A.B.S.

The organization says Chattanoogans expressed a strong belief in the Bible's accuracy and reported high levels of regular Bible reading.

Two other Tennessee areas, Tri-Cities (5) and Knoxville (8), ranked in the top 10 as well, making it the state with the most high-ranking cities.

American Bible Society's third-annual study of America's Most Bible-Minded Cities found that cities in the South, the Bible Belt, continue to perform strongly in Bible friendliness. Birmingham/Anniston/Tuscaloosa, Alabama, the 2015 top city, ranked second this year, followed by Roanoke/Lynchburg, Virginia, and Shreveport, Louisiana. Lexington, Kentucky, came up from No. 15 last year to claim the No. 10 spot, while Springfield, Missouri, dropped out of the top ten for the first time. Jackson, Mississippi, dropped from seventh to fifteenth.