Surveillance Cameras to Be Installed on Temple Mount 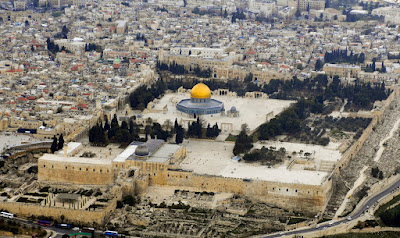 An aerial view of the Temple Mount in Jerusalem. (Wikimedia Commons)

(ISRAEL HAYOM)—Israel and Jordan agreed over the weekend to install surveillance cameras on the Temple Mount, which would enable both parties to monitor security incidents at the Jerusalem holy site. The closed-circuit TV grid is expected to become operational before the Passover holiday, in mid-April.

Israel considers the move an achievement, as according to one senior Jerusalem source, it would enable Israel to monitor and document Muslim rioters. "This is a significant supervisory measure to maintain order on the Temple Mount," he said....

Installing surveillance cameras across the compound was at the heart of a compromise brokered between Prime Minister Benjamin Netanyahu and King Abdullah of Jordan by U.S. Secretary of State John Kerry.

According to the deal, live-streaming footage from the closed-circuit TV grid installed across the holy site will be monitored by Israeli and Jordanian officials at all times....

Jordanian Waqf and Islamic Affairs Minister Hayel Dawood stressed over the weekend that surveillance cameras will not be installed inside the mosque itself. The latter fact is being presented as a Palestinian and Jordanian achievement, as Israel sought to install closed-circuit TV inside the prayer compound, where rioters have barricaded themselves in the past.