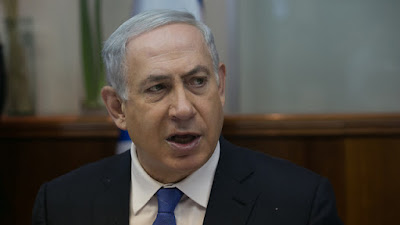 (YNET NEWS)—Prime Minister Benjamin Netanyahu warned Tuesday that Europeans were not doing enough to combat anti-Semitism, in a statement on the eve of International Holocaust Remembrance Day.

Netanyahu warned that "in Europe and elsewhere, Jews are once again being targeted just for being Jews".

"Islamic extremists incorporate the most outrageous anti-Semitism into their murderous doctrines. We see this in Gaza; we see it in Raqqa; we see it in Tehran."

On Tuesday, German Chancellor Angela Merkel warned of the dangers of anti-Semitism, in remarks at the opening of an exhibition featuring works by Jewish concentration camp prisoners.

She cited in particular the fears of German Jewish leaders that the need to impart the lessons of the Holocaust has grown more urgent with the influx of a record 1.1 million asylum seekers to Germany last year, many from the Middle East.

But Netanyahu warned that anti-Semitism was not merely growing among immigrant communities, but was gaining traction across Europe.

"Even respected Western opinion leaders have become afflicted with hatred for the Jewish people and the Jewish state," Netanyahu said, without giving names.

"The obsession with the Jews—the fixation on the Jewish state—defies any other rational explanation," he continued.

"While across the region, Islamist militants brutalize entire populations, enslave and rape women, murder Christians and gays, the UN Human Rights Council repeatedly condemns Israel. More than North Korea. More than Iran. More than Syria. More than all of them put together. Some things just don't change."

"When a state like Iran and movements like ISIS and Hamas openly declare their goal of committing another Holocaust, we will not let it happen," Netanyahu stressed. "But Europe and the rest of the world must stand up together with us. Not for our sake; for theirs."

The International Holocaust Remembrance Day will be marked around the globe on Wednesday to commemorate the six million Jews who died at the hands of Nazi Germany and its allies. Israel marks its own Holocaust remembrance day, which this year will be held in May....