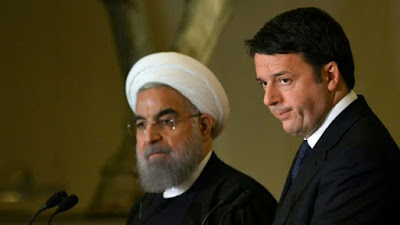 (TIMES OF ISRAEL)—Iran's return to the international fold accelerated on Monday as President Hassan Rouhani sealed multi-billion dollar deals with Italian companies keen to capitalize on the lifting of sanctions on the Islamic Republic.

Business deals worth billions are "just the beginning" for the two countries, Italian Prime Minister Matteo Renzi was quoted by Reuters as saying in the course of a press conference, with Rouhani standing beside him.

Rouhani tweeted on his arrival in the Italian capital that he was "looking forward to deepening bilateral ties and exploring opportunities for #ConstructiveEngagement."

He is due at the Vatican on Tuesday before flying to France on Wednesday on his first official European trip as president. It is also his first overseas trip since the nuclear deal came into force earlier this month, clearing the way for Iran to rebuild its relationship with the West....

Italian companies have been among the quickest off the blocks with a major business delegation having visited Tehran in November and some 500 entrepreneurs invited to a forum Rouhani will attend on Tuesday.

Italy was formerly Iran's biggest European trading partner, but trade has dwindled to a fifth of its former volume as a result of the sanctions.

National carrier Alitalia said Monday it was upgrading its Rome-Tehran service from four a week to daily flights in anticipation of increased business and tourist travel....