Not Apostasy, but Rapture!

Paul's second epistle to the Thessalonians was written as a response to a query that church had sent to the Apostle. The Thessalonians were troubled by a letter they had received, purportedly from Paul (but actually a forgery), alleging that they had entered into "the day of the LORD" (2 Thess 2:2). They were troubled by this since Paul had previously taught them that the rapture of the Church would happen before the outpouring of God's wrath during the Tribulation period (1 Thess 4:13-5:9); if this allegation were true, and the day of the LORD had indeed begun, that meant the believers in Thessalonica had been left behind! It should be noted that the believers in Thessalonica were undergoing intense (albeit local) persecution (1 Thess 3:2-4), so that it was no doubt tempting for them to believe that the Tribulation had begun.

Paul's reply was to immediately remind them of what he had previously taught them (2 Thess 2:5); namely, that the Antichrist cannot even be "revealed", which begins the Tribulation (Dan 9:27), until after an event he calls "the falling away" (2 Thess 2:3). The Greek noun translated "falling away" is apostasia, transliterated as 'apostasy' in some English versions. The correct translation of apostasia is 'departure'; exactly what kind of departure is in view depends upon context, and can just as likely mean a physical departure as it does a departure from the faith (i.e., apostasy). It is interesting that all English translations before the KJV rendered apostasia in 2 Thessalonians 2:3 as "departure", whereas the KJV and most subsequent translations render it "falling away" or something which similarly implies the 'departure' is religious in nature. There is nothing in the context of 2 Thessalonians 2, however, that demands (or even suggests) that the departure to which Paul refers be non-physical. 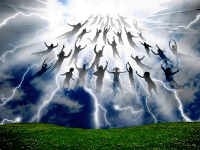 Furthermore, in the Greek text, there is the definite article in conjunction with apostasia, so that the best translation is not "a falling away", but "the departure". The use of the definite article means that Paul is referring to a specific event that he expects is already known to the Thessalonians. Since Paul's first epistle to them included the most detailed revelation of the rapture of the Church in the N.T., and in fact mentions the rapture in every chapter (1 Thess 1:9-10; 2:19; 3:13; 4:13-17; 5:1-11), while not one reference to a religious apostasy or departure from the faith occurs, context demands that the specific departure to which Paul refers is the rapture. The context of 2 Thessalonians 2 also supports this, since the rapture, referred to as "the coming of our Lord Jesus Christ, and our gathering together unto him", introduces the chapter (2 Thess 2:1). Thus, the evidence is overwhelming that the departure Paul holds out as necessarily taking place before "the day of the LORD" and the revealing of the Antichrist is the rapture of the Church. Thus, 2 Thessalonians 2:3 is the most explicit teaching of the Pre-Trib rapture in the Bible.