Was Simon the Sorcerer Saved?

Then they laid hands on them, and they received the Holy Spirit. And when Simon saw that through the laying on of the apostles' hands the Holy Spirit was given, he offered them money, saying, "Give me this power also, that anyone on whom I lay hands may receive the Holy Spirit." But Peter said to him, "Your money perish with you, because you thought that the gift of God could be purchased with money! You have neither part nor portion in this matter, for your heart is not right in the sight of God. Repent therefore of this your wickedness, and pray God if perhaps the thought of your heart may be forgiven you. For I see that you are poisoned by bitterness and bound by iniquity." Then Simon answered and said, "Pray to the Lord for me, that none of the things which you have spoken may come upon me." (Acts 8:17-24)

Can an individual recently saved from an occultic background commit a serious sin? Or would that horrendous blunder prove he was never really saved? The case in point is Simon Magus (magus is Latin for sorcerer) of whom the text says, "Then Simon himself also believed" (v. 13), along with the other Samaritans who heard Philip preach the gospel. But later, when the apostles Peter and John arrive and bestow the Holy Spirit on the new believers, Simon tries to purchase this apostolic power (and so the origination of the word simony, which means to purchase influence or power in the church). Peter's reaction is swift and his words severe, cursing Simon and telling him to repent. Many have wondered, what is going on here? 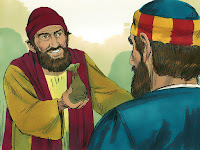 Insight from the Narrative

Bible authors, like Luke who wrote Acts, did not write stories randomly, but as part of a larger narrative. It is always necessary to note the nature and flow of events.

Acts chapter 8 relates the transition of the gospel message from Jerusalem to Samaria. It comments on a good believer who was martyred, Stephen (v. 2), and a bad unbeliever who persecuted the church, Saul (v. 3), who later believes (Acts chapter 9). After the story about Simon, the end of chapter 8 relates the story of an Ethiopian eunuch who believes Philip's preaching of Christ (vv. 26-40). The stories show that the reach of the gospel is comprehensive; it saves those who are hardened (Saul) as well as those who are open (Ethiopian). These stories also seem to emphasize the various effects that the gospel has on these different people. One accepts martyrdom (Stephen), one becomes an apostle (Saul/Paul), one tries to personally benefit (Simon), and one goes on his way rejoicing in his salvation (Ethiopian). If Simon is not saved, he would be the exception in the narrative.

The Evidence that Simon was not Saved

Some believe that Simon does not show enough change of life if he was saved. Many have trouble accepting that a true believer would try to buy the apostles' unique power to bestow the Holy Spirit. They also think Peter's words are fit only for an unbeliever:

The evidence that Simon was saved

On the other hand, many think there is abundant evidence that Simon was a true believer.

Peter's words. It is important to observe that Peter never says anything about Simon not believing or Simon rejecting Christ. He indicates that Simon will perish with his money (this should not be considered a prophecy, but a provisional rebuke). It would be odd for Peter to consign money to eternal hell if this is what he is referring to. The word "perish" (from apoleia) sometimes refers specifically to eternal destruction in hell, but it has the general meaning of ruin or waste (see Mark 14:4/Matt. 26:8; Acts 25:16; 2 Pet. 3:16) and is used at least once in reference to a saved person (1 Cor. 8:11). Certainly, Simon's misguided request shows such a perverted view of the apostolic position and the gift of the Holy Spirit that it would lead to his ruin or waste in this life. What Peter seems to be reacting to is Simon's sin of avarice born of jealousy for the unique apostolic power of bestowing the Holy Spirit (v. 20). Thus when Peter says, "You have neither part nor portion in this matter" (v. 21), the most obvious matter at hand is Simon's illegitimate desire for this apostolic privilege, not salvation. Then Peter says that Simon's heart is not right with God (v. 21), which would be an odd way to describe an unbeliever. He tells Simon to repent of a specific sin, "of this your wickedness," and find God's forgiveness (Acts 8:22)—again, an odd way to address an unbeliever who is condemned by sinfulness, not any one sin. Peter's take on Simon's problem is not that he is dead in sin or separated from God, but that he is "poisoned by bitterness and bound by iniquity," both obvious references to his covetousness and avarice (Acts 8:23). Believers can succumb to bitterness and sin (Eph. 4:32; Heb. 12:15). Peter himself denied Christ as a new believer and later denied the gospel of grace by his actions (Luke 22:54-62; Gal. 2:11-14).

Simon's words. After hearing Peter's rebuke, Simon responds by asking the apostles to pray for him so that none of Peter's words would become reality. That is how the encounter ends. Simon does not ask for salvation, but repents of the specific sin that Peter addressed ("this your wickedness," v. 22). This describes the response of a believer rather than someone who is initially believing in Christ for salvation.

After reviewing the testimonies of Luke, Peter, and Simon, the evidence seems to support the fact that Simon had believed in Jesus Christ like the other Samaritans, was saved and baptized like them, but then sinned greatly. He was in danger of experiencing God's temporal curse for his specific sin of trying to purchase an apostolic power. His need was not to get saved, but to repent of that sin. He needed to see how he was terribly wrong and reject the error of his ways, which he seems to do. Christians can sin grievously, perhaps more so if they are new converts. But the grace that saves unbelievers freely, will also forgive believers abundantly.