Because today's evangelical world believes that the church is experiencing the Messianic kingdom, we began a study chronicling what the Bible teaches about the kingdom. In this series, the biblical teaching on the kingdom has been surveyed from Genesis to Revelation. This earthly kingdom is anticipated in the office of Theocratic Administrator that was lost in Eden, in the biblical covenants, in the predictions of the Old Testament prophets, and in the earthly theocracy governing Israel from the time of Moses to Zedekiah. This theocratic arrangement terminated with the initiation of the "Times of the Gentiles" when the nation had no king reigning on David’s Throne as Judah was trampled by various Gentile powers. Against that backdrop entered Jesus Christ, the rightful Heir to David's Throne. Had first-century Israel enthroned Christ, the earthly kingdom would have become a reality. Despite this unprecedented opportunity, Israel rejected the kingdom offer leading to the kingdom's postponement.

Due to this postponement, Christ explained the spiritual conditions that would prevail during the kingdom's absence. This interim program includes His revelation of the kingdom mysteries and the church. Because neither represents the fulfillment of God's Old Testament kingdom promises, the kingdom will remain in a state of abeyance as long as God's present work in the world continues through His interim program. However, one day the church's mission on the earth will be completed resulting in the church's removal from the earth through the rapture. Then God, who is not forgetful of His prior unconditional covenants with Israel, will re-extend the offer of the kingdom to national Israel in the midst of the coming Great Tribulation. Unlike at the First Advent, this time the offer will be accepted leading to Christ's return and subsequent earthly kingdom. Revelation explains how the world will eventually transition from the rule that Satan has had over the world ever since the Fall in Eden to the future time in history when God and His people "will reign upon the earth" (Rev. 5:10b; 11:15b). The Apocalypse furnishes the important detail of the Messianic kingdom's duration, namely one-thousand years (Rev. 20:1-10). God's kingdom program will extend beyond Christ's one-thousand year earthly reign as it transitions into the Eternal State (Rev. 21-22).

We further noted that those closest to the biblical text, the early church fathers, also held to premillennialism or the reality of the coming, earthly kingdom of Christ. We also observed that the problem with using New Testament verses in an attempt to argue that the Messianic kingdom now exists in spiritual form is to interpret the New Testament in a manner that contradicts the Old Testament.

In addition, we began scrutinizing a series of texts that "kingdom now" theologians routinely employ in order to argue that the kingdom is a present spiritual reality. We began with the use of such alleged "kingdom now" texts in the life of Christ. We noted that the expression "Repent, for the kingdom of heaven is at hand" merely communicates that the Old Testament expectation of an earthly kingdom had drawn near in the person of Christ. Had the nation enthroned Christ (Deut. 17:15), what the Old Testament predicted concerning an earthly kingdom would have become a reality not only for Israel but also for the entire world. As long as Christ was present amongst first-century Israel offering them the kingdom, it was in an imminent state of nearness. This reality is an entirely different matter from saying that the kingdom was present or had arrived.

We also observed that Matthew 6:9-13 is in actuality a model prayer for the disciples consisting of three requests for the kingdom to come and three additional requests for their temporal needs to be met prior to the kingdom's establishment. Such a framework makes it obvious that the Lord did not establish the kingdom at His First Advent. 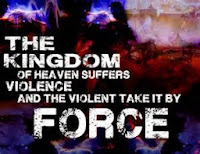 Another pair of parallel texts that "kingdom now" theologians use is Matthew 11:12 and Luke 16:16. These verses speak of the kingdom being resisted and suffering violence during the days of John the Baptist and Christ. Matthew 11:12 says, "From the days of John the Baptist until now the kingdom of heaven suffers violence, and violent men take it by force." Blaising, an advocate of inaugurated eschatology, [1] contends that the kingdom had to be present in order for it to be resisted so strenuously. [2] But is it possible for the kingdom to suffer violence without being present? An answer can be found in the parallel passage (Luke 16:16), which says, "The Law and the Prophets were proclaimed until John; since that time the gospel of the kingdom of God has been preached, and everyone is forcing his way into it." Here, the emphasis is on the proclamation of the kingdom. Thus, what is actually being rejected is the proclamation of the kingdom or the message of the kingdom rather than any present manifestation of the kingdom. This interpretation finds support in the verses following Matthew 11:12 where Christ equates the hardness of His generation to His message to children not pleased with the asceticism of John nor the ministry of Christ (Matt. 11:16-19). [3]

The Kingdom of God Has Come Upon You

Another statement made by Christ that is utilized by "kingdom now" theologians is found in Matthew 12:28, which says, “But if I cast out demons by the Spirit of God, then the kingdom of God has come upon you” (see also Luke 11:20). "Kingdom now" theologians interpret this statement to mean that Christ began a spiritual form of the Messianic kingdom at His First Advent. However, this view fails to interact with Christ’s “offer of the kingdom” to first-century Israel. [4] This is the idea that the kingdom was offered to the nation by John the Baptist, Christ, and the disciples, was rejected by the nation, postponed, and eventually will be re-offered to the nation during the future Tribulation period. This interpretive framework allows the various manifestations of the kingdom in the life of Christ (Matt. 12:28), such as His miracles, the exorcising of demons, and His Transfiguration (Matt. 17:1-8) to be interpreted as mere tokens of the coming kingdom rather than announcing an inaugurated form of the kingdom. In other words, the presence of the kingdom in the life of Christ could become a reality for Israel and the world had Israel fulfilled her responsibility of enthroning her king (Deut. 17:15). Unfortunately this offer of the kingdom approach is totally by-passed by "kingdom now" theologians. Instead of seeing an offer in the kingdom preaching of John the Baptist and Jesus, they instead interpret Matthew 12:28 as the "breaking in" of the kingdom "in minuscule" and "spiritual form.”

Yet, Toussaint provides eight reasons why the "offer of the kingdom" should not be so easily dismissed since it rests upon firm exegetical footing. It is found not only in Matthew’s Gospel but also Luke’s Gospel. [5] First, the idea of the contingency of a benefit depending upon whether the offeree is willing to accept the terms of the offer is well established in the Old Testament (1 Kgs. 11:38; Jer. 18:7-10). Second, Israel’s covenantal structure required repentance before the kingdom could be established (Lev. 26; Deut. 28). Third, the message of the kingdom’s nearness was confined to national Israel. Matthew 10:5-7 says, “These twelve Jesus sent out after instructing them, saying, ‘Do not go in the way of the Gentiles, and do not enter any city of the Samaritans; but rather go to the lost sheep of the house of Israel. And as you go, preach, saying, ‘The kingdom of heaven is at hand.’” Fourth, the contingency of the offer is seen in statements of Christ, such as, “And if you care to accept it, he himself is Elijah, who was to come” (Matt. 11:14). Of this statement, Toussaint remarks, “There is scarce a passage in Scripture which shows more clearly that the kingdom was being offered to Israel at this time. Its coming was contingent upon one thing: Israel receiving it by genuine repentance.” [6]

Fifth, there is a cessation of the announcement of the kingdom after Israel rejects her Messiah (Matt. 12; Luke 11). Sixth, the Lord pronounces judgment upon that generation (Matt. 23:36-39) for failing to recognize the hour of their visitation (Luke 19:42, 44; Dan. 9:26). In other words, they were judged because they failed to accept the offer. Seventh, the parables of rejection depict the postponement of the kingdom. While earlier in Luke’s gospel the kingdom is portrayed as being near (Luke 10:9, 11), the parable of the minas was told in order to dissuade the disciples’ expectation of the kingdom’s nearness (Luke 19:11). The parable teaches that the kingdom program would be postponed for a long duration and the disciples had obligations to fulfill in the interim (Luke 19:11-27). Eighth, the message of the kingdom’s imminence does not reappear until the context pertains to the Seventieth Week of Daniel or the future Tribulation period (Matt. 24:14; Luke 21:31). In sum, when understood in the light of this kingdom offer, Christ's statement in Matthew 12:28 was not indicative of the fact the kingdom had arrived. Rather, His statement simply meant that the tokens of the kingdom (His miracles, exorcisms, etc...) could have become a reality for the nation of Israel had she responded to the contingency of the offer that Christ was extending to her.

[1] While still holding to some form of a future earthly reign of Christ, inaugurated eschatology advocates maintain that the kingdom is still a present spiritual reality with Christ presently orchestrating it from David's Throne in heaven.

[3] Stanley Toussaint, "Israel and the Church of a Traditional Dispensationalist," in Three Central Issues in Contemporary Dispensationalism (Grand Rapids: Kregel, 1999), 233.

[4] See parts five and six in this series for a fuller development of this concept.

[5] Stanley Toussaint, "The Contingency of the Coming Kingdom," in Integrity of Heart, Skillfulness of Hands: Biblical and Leadership Studies in Honor of Donald K. Campbell (Grand Rapids: Baker, 1994), 225, 232-35.