Because today's evangelical world largely believes that the church is presently experiencing the messianic kingdom, we began a study chronicling what the Bible teaches concerning this important issue of the kingdom. That there will be a future, messianic kingdom on earth has been revealed thus far through the divine intention to restore the office of Theocratic Administrator (Gen. 1:26-28) that was lost in Eden (Gen. 3). Likewise, the promise of a future, earthly, messianic reign was prophesied in the Abrahamic Covenant (Gen. 15) and related sub-covenants. It was also explained that while these covenants guarantee that the kingdom will one day come to the earth through Israel, according to the Mosaic Covenant, the kingdom's ultimate manifestation is conditioned upon the nation's acceptance of Christ as her long-awaited king during the final events of the future Tribulation period. The previous article also explained how God restored the office of Theocratic Administrator that was lost in Eden, at least in a limited sense, at Sinai. This theocratic arrangement covered most of Old Testament history as God, even after the time of Moses, governed Israel indirectly through Joshua, various judges, and finally, Israel’s kings until the Babylonian Captivity ended the Theocracy. 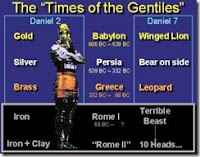 The Times of the Gentiles

This Babylonian Captivity initiated a dark time in Jewish history known as the "Times of the Gentiles" (Luke 21:24; Rev. 11:2). This era is defined as the period of time when the nation no longer has a Davidic king reigning on David’s Throne. During this period, Judah would be trampled down by various Gentile powers. These powers include Babylon (605–539 B.C.), Medo-Persia (539–331 B.C.), Greece (331–63 B.C.), Rome (63 B.C.–A.D. 70), as well as the future, revived Roman Empire of the Antichrist (sometimes called "Rome Phase II"). Nebuchadnezzar, in a dream, saw this time period symbolized by a beautiful, dazzling statue. Each part of the statue represents a different Gentile power (Dan. 2). In his dream, Daniel saw the same period of time in the form of four grotesque beasts. Each beast pictured a different Gentile power (Dan. 7). To Nebuchadnezzar, who was the king of Babylon or the first Gentile power to trample down Judah, this period appeared beautiful. This perspective explains why Nebuchadnezzar perceived this era in the form of an attractive statue. To Daniel, a Jew, whose people would be trampled down by these Gentile powers, this period was dismal. This perspective explains why he saw the Times of the Gentiles as represented by various ferocious beasts.

Note, the Times of the Gentiles, which began with Nebuchadnezzar's deposing of Zedekiah and the Babylonian Captivity in 586 B.C., are marked by the following three characteristics: the termination of the earthly theocracy, the lack of a Davidic king reigning on David’s Throne in Jerusalem, and Judah being trampled underfoot by a successive array of Gentile powers. The Times of the Gentiles will run their course and will eventually conclude with restoration of a rightful king reigning on David’s Throne, and the return of the shekinah glory of God to the Millennial temple (Ezek. 43:1-5). This difficult period will end with the return of Jesus Christ to rule and reign from David’s Throne in Jerusalem (Dan. 2:34-35, 44-45; Matt. 25:31). While the Times of the Gentiles began with Nebuchadnezzar's deposing of Zedekiah, it will be terminated at the return and enthronement of Christ thus inaugurating the long-awaited messianic kingdom.

Thus, only after the final kingdom of man (the revived Roman Empire of the Antichrist) has been terminated by Christ, will the Davidic kingdom then be established on earth (Dan. 2:34-35; 43-45; 7:23-27). This fact alone should deter interpreters from finding a premature manifestation of the kingdom in the present Church Age. Unfortunately, "kingdom now" theologians ignore this chronology by arguing for a present, spiritual form of the kingdom, despite the fact that the kingdoms of man have not yet run their course, the Antichrist and his kingdom have not yet been overthrown, and the Second Advent has not yet occurred. This Danielic chronology causes Unger to conclude:

...Daniel neither in the image prophecy of chapter 2 nor in the beast prophecy of chapter 7 deals with the present age of the calling out of the church, the period during which Israel is temporarily in national rejection...Daniel was given the prophetic vision of Rome up to the time of Christ's death (the two legs). The vision resumed with the resumption of the divine dealing with national Israel (after the completion of the church at the rapture) during the period between glorification of the church and the establishment of the Kingdom over Israel (Acts 1:6). Hence, the iron kingdom with its feet of iron and clay (cf. 3:33-35, 40, 44) and the nondescript beast of 7:7-8 envision not only Gentile power (1) as it was at the first advent, but (2) also the form in which it will exist after the church period, when God will resume His dealing with the nation Israel. How futile for conservative scholars to ignore that fact and to seek to find literal fulfillment of those prophecies in history or in the church, when those predictions refer to events yet future and have no application whatever to the church. [1]

The Prophets Anticipate the Kingdom

Throughout the dark years of national disobedience, Gentile dominion, and kingdom postponement, the Old Testament prophets held out hope for the nation and the world by faithfully speaking of a coming generation of Jews who would return to Yahweh thereby ushering in kingdom blessings. On account of this ray of spiritual light that the prophets provided in the midst of spiritual darkness, Peter refers to prophecy as, "...the prophetic word made more sure, to which you do well to pay attention as to a lamp shining in a dark place, until the day dawns and the morning star arises in your hearts" (2 Pet. 1:19). While it would take multiple volumes to adequately portray all that the Old Testament prophets revealed concerning the coming kingdom, [2] a few predictions from the prophet Isaiah will suffice. According to Isaiah 2:1b-4:

Now it will come about that In the last days The mountain of the house of the LORD Will be established as the chief of the mountains, And will be raised above the hills; And all the nations will stream to it. And many peoples will come and say, "Come, let us go up to the mountain of the LORD, To the house of the God of Jacob; That He may teach us concerning His ways And that we may walk in His paths." For the law will go forth from Zion, And the word of the LORD from Jerusalem. And He will judge between the nations, And will render decisions for many peoples; And they will hammer their swords into plowshares and their spears into pruning hooks. Nation will not lift up sword against nation, And never again will they learn war.

And the wolf will dwell with the lamb, And the leopard will lie down with the young goat, And the calf and the young lion and the fatling together; And a little boy will lead them. Also the cow and the bear will graze, Their young will lie down together, And the lion will eat straw like the ox. The nursing child will play by the hole of the cobra, And the weaned child will put his hand on the viper's den. They will not hurt or destroy in all My holy mountain, For the earth will be full of the knowledge of the LORD As the waters cover the sea.

According to these wonderful predictions, when the messianic kingdom materializes, Jerusalem will be the center of world spiritual and political authority. This authority will result in perfect justice, world peace, cessation of conflict with and among the animal kingdom, and universal, spiritual knowledge. These glorious conditions await a future Jewish generation's enthronement of the king of God's own choosing (Deut. 17:15). Such enthronement will make Israel not only the owner but also the possessor of all that is promised in Israel's covenants. As these covenantal blessings come upon Israel in that future day, the entire world will be blessed as well (Rom. 11:12, 15).

Continuation of the Times of the Gentiles Until Christ's Coming

Following the Babylonian Captivity in 586 B.C., the prophesied seventy years of national, divine discipline had run their course (Lev. 25:1-7; 2 Chron. 36:20-21; Jer. 25:11; 29:10). The newly inaugurated Persian government allowed God's people to return to their homeland (Ezra; Neh.). Thus, by the time of Christ, the nation had been back in the Promised Land for over five centuries. However, such long residency in the land did not mean that the Times of the Gentiles had concluded. During all of this time, Israel still had no reigning king upon David's Throne. Moreover, as Daniel predicted (Dan. 2; 7), Israel continued to be under the domination of various Gentile powers. Those powers included Persia, which was followed by Greece, and finally Rome. By the time Christ was born, the Roman Empire occupied the Promised Land, placed Israel under an enormous tax burden, and usurped from the Jews the right to execute their own criminals. Beyond this, the nation had gone through four hundred years of silence when God was not directly speaking to His people through prophetic oracles.

Against the backdrop of such silence and bondage entered Jesus Christ, the rightful heir to David's Throne. The Gospel accounts identify and affirm Jesus Christ as the long-awaited Davidic Descendant prophesied in both the Abrahamic and Davidic Covenants. For example, Matthew’s Gospel connects Christ genealogically to both Abraham and David (Matt. 1:17). Matthew also routinely associates Christ with the title "Son of David" (Matt. 9:27). Luke similarly shows Jesus to be the rightful Heir to God’s promises to David (Luke 1:32-33, 68-69).