Because today's evangelical world believes that the church is experiencing the Messianic kingdom, we began a study chronicling what the Bible teaches about the kingdom. This earthly kingdom is anticipated in the office of Theocratic Administrator that was lost in Eden, in the biblical covenants, in the predictions of the Old Testament prophets, and in the earthly theocracy governing Israel from the time of Moses to Zedekiah. This theocratic arrangement terminated with the initiation of the "Times of the Gentiles" when the nation had no king reigning on David’s Throne as Judah was trampled by various Gentile powers. Against that backdrop entered Jesus Christ, the rightful Heir to David's Throne. Had first-century Israel enthroned Christ, the earthly kingdom would have become a reality. Despite this unprecedented opportunity, Israel rejected the kingdom offer leading to the kingdom's postponement.

Due to this postponement, Christ explained the spiritual conditions that would prevail during the kingdom's absence. This interim program includes His revelation of the kingdom mysteries and the church (Matt. 13; 16:18). Because neither the kingdom mysteries nor the church represent the fulfillment of God's Old Testament kingdom promises, the kingdom will remain in a state of abeyance as long as God's present work in the world continues through His interim program. However, one day the church's mission on the earth will be completed resulting in the church's removal from the earth through the rapture. Then God, who is not forgetful of His prior unconditional covenants with Israel, will re-extend the offer of the kingdom to national Israel in the midst of the coming Great Tribulation. Unlike at the First Advent, this time the offer will be accepted leading to Christ's return and subsequent earthly kingdom. Revelation therefore explains how the world will eventually transition from the rule that Satan has had over the world ever since the Fall in Eden (Luke 4:5-8) to the future time in history when God and His people "will reign upon the earth" (Rev. 5:10b; 11:15b). The Apocalypse also furnishes the important detail of the Messianic kingdom's duration, namely one-thousand years (Rev. 20:1-10). A chronological approach to Revelation reveals that the Millennial kingdom will be followed by the Eternal State. Thus, God's kingdom program will extend beyond Christ's one-thousand year earthly reign as it transitions into the Eternal kingdom (Rev. 21-22).

Far from the incorrect or imprecise "kingdom now" terminology typically employed by many evangelicals today, the biblical idea of the kingdom is quite specific. It will manifest itself at a future time in history. When the kingdom comes it will culminate many biblical themes that begin as early as Genesis chapter one. In addition to being moral and ethical in tone, the kingdom will be tangible, literal, physical, geographical, and earthly. In anticipation for the glorious appearing of our Lord and His kingdom, we can pray as Christ taught us, "Your kingdom come" (Matt. 6:10). 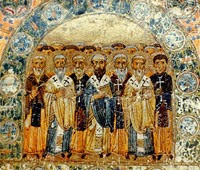 Belief of the Early Church

The articles in this series have carefully articulated the coming reality of a future, earthly reign of Christ drawn explicitly and exclusively from the entire Bible. If this biblical interpretation is clear, then it stands to reason that the earliest church fathers also held to a belief of a future, earthly reign of Christ. While the writings of these church fathers should not be elevated to the same level as the divinely inspired biblical text, their work can serve as a check upon our interpretation of Scripture. In other words, we can be further confident that the scriptural interpretation given thus far is correct since those closest to the biblical text, the early church fathers, also held to premillennialism or the reality of the coming, earthly kingdom of Christ. Interestingly, according to the writings of the earliest church fathers, the premillennial view was dominant in the first two centuries of the church. For example, Justin Martyr (A.D. 100–165) in his Dialogue with Trypho declared,

"But I and every other completely orthodox Christian feel certain that there will be a resurrection of the flesh, followed by a thousand years in the rebuilt, embellished, and enlarged city of Jerusalem as was announced by the prophets Ezekiel, Isaiah, and the others." [1]

The most striking point in the eschatology of the ante-Nicene age (A.D. 100–325) is the prominent chiliasm, or millenarianism, that is the belief of a visible reign of Christ in glory on earth with the risen saints for a thousand years, before the general resurrection and judgment. It was indeed not the doctrine of the church embodied in any creed or form of devotion, but a widely current opinion of distinguished teachers, such as Barnabas, Papias, Justin Martyr, Irenaeus, Tertullian, Methodius, and Lactantius. [2]

In this series, the biblical teaching on the kingdom of God has been surveyed from Genesis to Revelation. In view of this, why do so many believe that the Messianic kingdom has already materialized? Is there a biblical basis for such a belief? The same handful of New Testament texts are routinely and consistently employed in an attempt to argue for "kingdom now" theology. The purpose of subsequent articles is to scrutinize those passages that "kingdom now" theologians routinely use and to demonstrate that these texts really do not prove "kingdom now" theology. First, this article will set forth some general problems with a New Testament based kingdom now interpretation. Second, future articles will examine a few isolated texts that kingdom now theologians use and show their insufficiency to convey kingdom now theology. Third, coming articles will note why this trend of equating God's present work in the church with the Messianic kingdom is a matter believers should be concerned about since this theology radically alters God's design for the church.

Therefore, the problem with using New Testament verses in an attempt to argue that the Messianic kingdom now exists in spiritual form is to interpret the New Testament in a manner that contradicts the Old Testament. Hebrew-Christian scholar Arnold Fruchtenbaum explains the fallacy of such a proposition:

[7] Stanley Toussaint, "Israel and the Church of a Traditional Dispensationalist," in Three Central Issues in Contemporary Dispensationalism (Grand Rapids: Kregel, 1999), 231.