A Palestinian Arab terrorist on Tuesday stabbed to death a Jewish man waiting at a bus stop in central Samaria.

The victim, Eviatar Borovzky, was to be laid to rest later that same afternoon.

Israeli security forces immediately raided the home of the suspected assailant and took him into custody. It turns out the killer was a previous resident of Israeli jails who was released only six months ago in one of Israel's many ill-advised "goodwill gestures" to the Palestinian Authority. 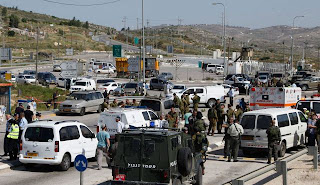 Jewish residents of the area exploded in rage over the attack, and a mob of young Israelis marched on a nearby Palestinian town, setting fields on fire and hurling stones at Arab vehicles.

Israeli firefighters managed to put out the fires, and police arrested half a dozen young Jews involved in the riot.

In related news, the Israeli air force on Tuesday carried out a targeted assassination of a known terrorist in Gaza who was involved in recent rocket attacks against southern Israel.

It was the first direct targeting of a Palestinian terrorist since last November's "Operation Pillar of Cloud," which Israel launched in response to escalating Gaza rocket fire.