Because today's evangelical world believes that the church is experiencing the Messianic kingdom, we began a study chronicling what the Bible teaches about the kingdom. In this series, the biblical teaching on the kingdom has been surveyed from Genesis to Revelation. This earthly kingdom is anticipated in the office of Theocratic Administrator that was lost in Eden, in the biblical covenants, in the predictions of the Old Testament prophets, and in the earthly theocracy governing Israel from the time of Moses to Zedekiah. This theocratic arrangement terminated with the initiation of the "Times of the Gentiles" when the nation had no king reigning on David's Throne as Judah was trampled by various Gentile powers. Against that backdrop entered Jesus Christ, the rightful Heir to David's Throne. Had first-century Israel enthroned Christ, the earthly kingdom would have become a reality. Despite this unprecedented opportunity, Israel rejected the kingdom offer leading to the kingdom's postponement.

Due to this postponement, Christ explained the spiritual conditions that would prevail during the kingdom's absence. This interim program includes His revelation of the kingdom mysteries and the church (Matt. 13; 16:18). Because neither the kingdom mysteries nor the church represent the fulfillment of God's Old Testament kingdom promises, the kingdom will remain in a state of abeyance as long as God's present work in the world continues through His interim program. However, one day the church's mission on the earth will be completed resulting in the church's removal from the earth through the rapture. Then God, who is not forgetful of His prior unconditional covenants with Israel, will re-extend the offer of the kingdom to national Israel in the midst of the coming Great Tribulation. Unlike at the First Advent, this time the offer will be accepted leading to Christ's return and subsequent earthly kingdom. Revelation therefore explains how the world will eventually transition from the rule that Satan has had over the world ever since the Fall in Eden (Luke 4:5-8) to the future time in history when God and His people "will reign upon the earth" (Rev. 5:10b; 11:15b). The Apocalypse also furnishes the important detail of the Messianic kingdom's duration, namely one-thousand years (Rev. 20:1-10). A chronological approach to Revelation reveals that the Millennial kingdom will be followed by the Eternal State. Thus, God's kingdom program will extend beyond Christ's one-thousand year earthly reign as it transitions into the Eternal kingdom (Rev. 21-22).

We further noted that those closest to the biblical text, the early church fathers, also held to premillennialism or the reality of the coming, earthly kingdom of Christ. We also observed that the problem with using New Testament verses in an attempt to argue that the Messianic kingdom now exists in spiritual form is to interpret the New Testament in a manner that contradicts the Old Testament.

In addition, we explained that the expression "Repent, for the kingdom of heaven is at hand" merely communicates that the Old Testament expectation of an earthly kingdom had drawn near in the person of Christ. Had the nation enthroned Christ (Deut. 17:15), what the Old Testament predicted concerning an earthly kingdom would have become a reality not only for Israel but also for the entire world. As long as Christ was present amongst first-century Israel offering them the kingdom, it was in an imminent state of nearness. This reality is an entirely different matter from saying that the kingdom was present or had arrived. 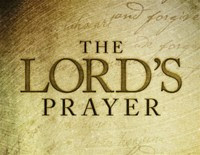 The "Lord's Prayer" and the Kingdom

Many evangelicals believe that Christ inaugurated the kingdom in spiritual form during His First Advent. [1] One way of showing the implausibility of this proposition is by exploring the true meaning of the so called "Lord's Prayer" found in Matthew 6:9-13. These verses say:

Our Father who is in heaven, Hallowed be Your name. Your kingdom come. Your will be done, On earth as it is in heaven. Give us this day our daily bread. And forgive us our debts, as we also have forgiven our debtors. And do not lead us into temptation, but deliver us from evil (NASB).

"The Lord's Prayer" is probably the wrong designation for these verses. Ironside explains,

"Jesus Himself could not pray for it, for it includes a request for forgiveness of sins, and He was ever the Sinless One." [2]

This prayer is more appropriately entitled "the Disciples' Prayer" since Christ was here teaching His disciples how to pray. The area of Scripture more appropriately entitled the "Lord's Prayer" is found in Christ's own high priestly prayer of John 17. The "Disciples' Prayer" is often misconstrued and misunderstood in modern evangelicalism. Many seek to organize it according to the pneumonic device "A-C-T-S." "A" stands for "adoration" as in adoration of God. "C" stands for "confession" as in personal confession of sins. "T" stands for "thanksgiving" as in thanking God for His work and provision in our lives. "S" stands for "supplication" as in asking God to supply our needs.

In actuality, this prayer is all about the kingdom. [3] Toussaint explains,

Three Requests Petitioning the Coming of the Kingdom

Matthew 6:9-10 can best be understood as three requests that petition the Father to bring to earth the long-awaited kingdom. First, Matthew 6:9b says, "Hallowed be Your name." "To hallow" means to honor, respect, revere, or treat as holy or sacred. The Greek word onoma translated "name" refers to a specific person or an individual. Thus, Christ is here teaching His disciples to pray for the coming of the time in history when God's name will be universally revered and respected by humanity. The Old Testament, from which Matthew's Gospel draws so heavily, explains that God's name will be honored in the coming kingdom. Isaiah 29:23 says,

"But when he sees his children, the work of My hands, in his midst, They will sanctify My name; Indeed, they will sanctify the Holy One of Jacob And will stand in awe of the God of Israel" (italics added).

"'I will vindicate the holiness of My great name which has been profaned among the nations, which you have profaned in their midst. Then the nations will know that I am the Lord,' declares the Lord God, 'when I prove Myself holy among you in their sight'" (italics added).

Second, Matthew 6:10a says, "Your kingdom come." The fact that the word "kingdom" in this expression "Your kingdom come" is given no detailed explanation must mean that Christ is drawing upon information already revealed about the kingdom in the Old Testament. Thus, He is teaching His disciples to pray for the arrival of what the Old Testament reveals concerning the kingdom. [5] As explained throughout this series, the Old Testament consistently depicts the kingdom in earthly, terrestrial terms. Toussaint criticizes "...those who with Platonic concepts subjectively spiritualize the future aspect of the kingdom of God in Christ's teaching." [6] The kingdom here is obviously a future reality since Christ is instructing His disciples to pray for its arrival. It is absurd for someone to ask for something that he already possesses. Glasscock explains why the kingdom in the Christ's day remained a future reality:

It should be remembered that Jesus was teaching His disciples how to pray, and the petitioning for God to bring about His kingdom certainly indicates that the world in which we live is not yet under His rule. Jesus introduced the kingdom at His appearing (cf. Matthew 4:17) but was rejected by His own people who chose to have Caesar as their king (John 19:15). He was not declaring that the kingdom would come in the hearts of His servants but that it would exercise dominion over the whole earth (ge). Thus, even though He was the Messiah and brought the promise of the kingdom to the nation, the kingdom is still expressed in eschatological terms, "let it come," because it is not yet realized in human history since the Messiah was rejected and killed. [7]

Third, Matthew 6:10b says, "Your will be done, On earth as it is in heaven." God's rule in heaven goes unchallenged. There, His decrees are never second-guessed. Here, Christ instructs His disciples to pray that the unchallenged rule that the Father enjoys in heaven would one day become an earthly reality. In other words, Matthew 6:10b "...is an appeal for God's sovereignty to be absolutely manifested on earth." [8] Such a request for the establishment of the sovereignty of God on earth is in essence a prayer for the earthly materializing of God's kingdom. In sum, the first three clauses found in the "Disciples' Prayer" (the requests for God's name to be revered, the kingdom to come, and the sovereign will of God to be done on the earth) are in reality requests for the yet future kingdom.