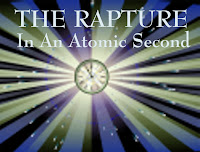 Seventh, the rapture will take place instantaneously. First Corinthians 15:52 says, "in a moment, in the twinkling of an eye, at the last trumpet; for the trumpet will sound, and the dead will be raised imperishable, and we will be changed" (italics added). Notice that Paul analogizes the speed of the rapture to "the twinkling of an eye." How long does it take someone to blink their eye? Such an occurrence can happen in less than a split second. Thus, the rapture also will be a nanosecond event.

Interestingly, the word "moment" is a translation from the Greek adjective atomos. According to a leading lexicon, this word means: "...'uncut'...then of someth. that is viewed as such a unit that it cannot be cut, esp. because of smallness (e.g. particle of matter, uncompounded word) indivisible...in a moment 1 Cor 15:52..." [1] Thus, atomos means something that is so small, tiny, or miniscule that it cannot be divided. From this Greek word atomos, we get our English word atom. An atom is indivisible. It cannot be divided or else an atomic explosion will occur. Thus, through his use of atomos, Paul analogizes the speed to which the rapture will occur to a particle that is so small that it cannot be divided. Both "the twinkling of an eye" and atomos represent descriptive linguistic tools skillfully used by the apostle in order to depict the rapture's rapid velocity.

Sometimes God deals with His people on the basis of large eras of time. For example, God gave the nation of Israel a 490 year time clock known as "Daniel's Prophecy of the Seventy Weeks" (Dan. 9:24-27). He also allowed them to experience the Babylonian captivity for 70 years (Jer. 25:11; 29:10). In fact, the number of days of Nebuchadnezzar's siege of Jerusalem in 586 B.C. was premised upon the number of past years of the nation's disobedience (Ezek. 4:5-7). God similarly sent His people into 400 years of Egyptian servitude (Gen. 15:13-16). However, Paul's choice of terms in 1 Corinthians 15:52 reveals that, unlike these previous eras of divine dealing, the rapture will not take place over an extended period of time but rather is something that will take place instantaneously.