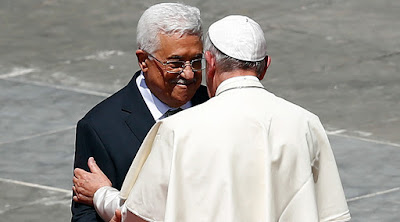 The Vatican signed its first treaty with the "State of Palestine" last June when it called for moves to end the Israeli-Palestinian conflict and backed a two-state solution.

"The Holy See and the State of Palestine have notified each other that the procedural requirements for [the accord's] entry into force have been fulfilled," the Vatican said in a statement on Saturday....

Israel has previously called the Vatican accord a hasty move that could damage prospects for advancing a peace agreement and impact its future diplomatic relations with the Vatican.

But the Holy See under Pope Francis is eager to have a greater diplomatic role in the Middle East, from where many Christians have fled because of conflicts in Syria, Iraq and other countries....