Putin to Meet Khamenei in Tehran on Monday 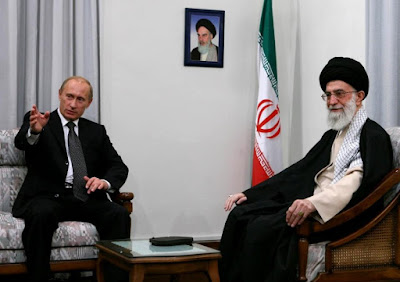 (TIMES OF ISRAEL)—Russian President Vladimir Putin will meet Iran's supreme leader Ayatollah Ali Khamenei during a visit to Tehran on Monday, the Kremlin said, as Moscow goes on a diplomatic push over the Syria conflict.

Putin has not visited Iran since 2007, and while in Tehran is expected to hold talks with the Islamic Republic's President Hassan Rouhani, Ushakov said.

Iran and Russia have recently strengthened relations and Moscow is reportedly considering loans worth $7 billion to Tehran.

Tehran will be playing host to a Gas Exporting Countries Forum (GECF) on November 23, as it prepares for the lifting of Western sanctions next year, under the terms of a nuclear agreement it struck with world powers in Vienna in early July.

Iran has also gained a seat at the table in negotiations over the future of Syria, at Russia's insistence. Both countries are supporting embattled Syrian President Bashar Assad in the talks, which also include the US and Saudi Arabia....