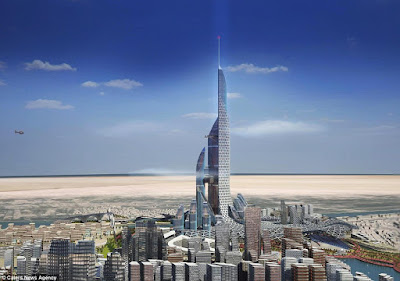 AMBS Architects has proposed a 1,152-metre-tall skyscraper for Iraq's Basra Province, which would surpass Jeddah's Kingdom Tower and Dubai's Burj Khalifa to become the tallest building in the world.

The structure—a tower named 'The Bride'—would feature four climbing towers dwarfing the world's other mega structures including the Burj Khalifa.

The Bride's tallest structure would be a 241-floor, 3,162ft-high centrepiece, Tower 1, made up of seven sections that designers say would 'relegate super tall towers as a thing of the past'.

Proposals for The Bride, which look to answer oil-rich Basra's intention of maximising the city's capacity by 2025, were put forward by AMBS Architects. They remained secret until now for security reasons. A price for construction has yet to be revealed....

The Basra province, in southern Iraq, has remained removed from the political and religious tensions elsewhere in the country.

Basra has the bulk of the country's oil reserves, is one of the world's fastest-growing business centres, and is home to Iraq's main port....