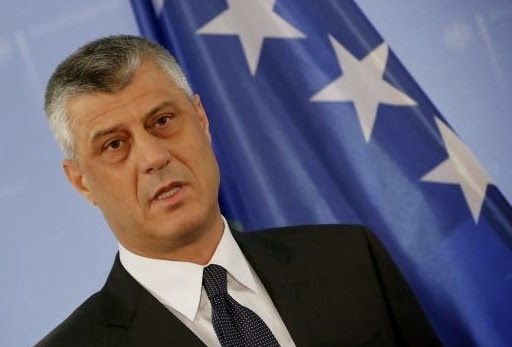 (REUTERS)—Kosovo's Foreign Minister Hashim Thaci urged the European Union and NATO to speed up integration of Balkan states or risk the spreading influence of both Russia and Islamist extremists.

Thaci, the first prime minister of independent Kosovo until last year, told Reuters he hoped for tangible results in the coming months, such as a new EU visa regime for Kosovo.

"It is the moment when Brussels should move from rhetoric and nice words about Kosovo to concrete measures," Thaci said in Berlin on Tuesday, after meeting his German counterpart Frank-Walter Steinmeier.

Kosovo, a poor, landlocked state of 1.7 million people, declared independence from Serbia in 2008, but Belgrade and its former Soviet master Moscow refuse to recognize this and have blocked its membership of bodies such as the United Nations....

While Montenegro, Serbia, the former Yugoslav Republic of Macedonia, Albania, Bosnia and Herzegovina and Kosovo are all looking to join the EU, Brussels has said organized crime, corruption and media restrictions are limiting progress.

Thaci called for the membership process to be speeded up.

"The EU should not delay the accession and enlargement processes and integration of Kosovo and the region into the European Union, but also in NATO," he said.

Russia has drawn parallels between its annexation of Ukraine's Crimea last year, and NATO's military support for Kosovo's self-determination in 1999. Thaci rejected this and said Pristina's future lay in the "Euro-Atlantic family".

"Any delay in this process is a dangerous one. It opens the way for penetration and the increase of influence of Russia in political terms, economic term and military terms," he said.

"But it also opens the way for ISIS to penetrate the region and influence the region," he said, referring to Islamic State....