Why the Whole Thing Stinks to High Heaven

(THE WORD ON POLITICS)—Two weeks ago the President of the United States via an executive order granted amnesty to at least five million people living illegally in our country. In other words, at least five million people who were formerly considered illegal aliens have now been granted legal status with a pathway to citizenship with the stroke of a pen. For at least seven reasons, this is a lose/lose situation for our once great country. In our last post, we explored the following four of these reasons: physical danger, totalitarianism, an insult to legal immigrants, and rewarding illegal behavior. In this post, we will conclude our short two-part series by examining three more reasons.

Fifth, the President's executive order will do further damage to an already sluggish and struggling economy. Michael Reagan explains the increased financial pressure amnesty will have on our already bloated budget:

According to a study issued in August, the Center for Immigration Studies—one of the first to estimate the impact of illegal immigration on the federal budget, based on Census Bureau data—households headed by illegal aliens used $10 billion more in government services than they paid in taxes...The study also finds that if illegals were given amnesty, the fiscal burden at the federal level would grow to nearly $29 billion. Illegal alien households are estimated to use $2,700 a year more in services than they pay in taxes, creating a total fiscal burden of nearly $10.4 billion on the federal budget... [1]

Beyond this, the President's executive order will also further hurt the already struggling American middle class. Coming from repressed economies, especially Mexico, aliens are content to earn three or four dollars per hour in America as compared to fifty cents per hour in Mexico. Thus, because these immigrants are willing to perform jobs at far below normative American wage rates, employers will obviously prefer to hire these aliens rather than the typical long-term American resident thereby causing tremendous damage to America's middle class. Another group hurt by this new policy will be black-Americans, which have been amongst Obama's most loyal supporters. Yet, black unemployment has not improved since Obama took office. In fact, his executive order will likely worsen this situation.

Sixth, the President's executive order represents a classic and text book example of an unequal treatment of different nationalities under the law. The same "compassion" that the Obama Administration desires to show Mexican immigrants through amnesty it seems simultaneously unwilling to show to other people groups seeking refuge in the United States. As Todd Starnes reports, "The Romeike family fled their German homeland in 2008 seeking political asylum in the United States—where they hoped to home school their children. Instead, the Obama administration wants the evangelical Christian family deported." [2] If the Obama Administration wants to set aside America's immigration laws on the grounds of extending compassion, then why not grant asylum to Christians suffering around the world under the thumb of cruel and barbaric Islamic Theocracies and dictatorships, such as in Egypt, Syria, or Iraq? Why is compassion only a one-way street poured out on Mexican immigrants?

The answer is obvious. Based on the November midterm election results, the American middle class no longer supports Obama or his policies, which incidentally he said were on the November ballot. Thus, it is now necessary for him to find another 5 million voters who will support his policies and the Democratic Party. The end game is to grant illegal Mexican immigrants executive amnesty and get them enrolled in and dependent upon as many big government social programs as possible. Such dependency will thereby convert these former illegal aliens from undocumented aliens into documented Democrats. The Democrats, of course, will consistently promise and make good on the promise of enlarging these subsidies. All of the Administration's talk about compassion is really a cover for their true motivation: unbridled political power. How interesting it is that talk about compassion can actually serve as a cloak for a self-serving motive. At this point, I am reminded of Judas who, in John 12:3-6, used rhetoric about concern for the poor to disguise his own greed:

Mary then took a pound of very costly perfume of pure nard, and anointed the feet of Jesus and wiped His feet with her hair; and the house was filled with the fragrance of the perfume. But Judas Iscariot, one of His disciples, who was intending to betray Him, said, "Why was this perfume not sold for three hundred denarii and given to poor people?" Now he said this, not because he was concerned about the poor, but because he was a thief, and as he had the money box, he used to pilfer what was put into it.

Seventh, the President's executive order represents a perverted understanding and interpretation of the Bible. In Obama's speech defending his executive amnesty decision, Obama referenced a quote from the Bible, Exodus 23:9, "Scripture tells us that we shall not oppress a stranger, for we know the heart of a stranger—we were strangers once, too." [3] 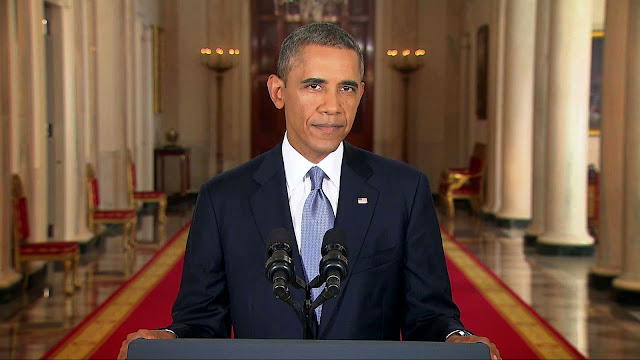 Of course, anyone can quote the Bible out of context for his own purposes, as even the devil himself does that (Luke 4:9-11; Ps 91:11-12). How hypocritical for the President to selectively use a Scripture verse out of its context in this instance and yet fail to consider what the Scripture says regarding other polices that he embraces, such as abortion on demand and homosexual marriage. In fact, earlier in his career, Obama can be seen on "youtube" mocking those who build their public policy views from Scripture. [4] Yet, here we find Obama doing the very same thing when it serves his purposes.

In actuality, it is biblical to oppose illegal immigration and amnesty. For one thing, the Bible teaches that we should obey the laws of the land (Rom. 13:1-7). Illegal immigrants by definition are violating the American immigration laws. Why would I support any illegal activity when the Scriptures are very clear that we should obey the government whenever possible? Beyond this, God Himself has established national entities and their existing borders (Gen. 10:32; 11:1-9; Deut. 32:8; Acts 17:26). Illegal immigration and amnesty represent a rebellion against this principle by pretending that these borders do not exist. Three things are necessary in order to have a bonafide nation: a common language, a common culture, and borders. Illegal immigration and amnesty reject the borders principle and consequently violate the minimum requirement for the existence of a nation. The bottom line is that God has established the individual nation-state. An open borders mentality rebels against God's standard, which is pro nation-state.

Although legal immigration is part of the rich American tradition, amnesty, on the other hand, grants a pathway to legal status and ultimately citizenship to those with a limited knowledge of our American Constitution or our obligation to protect and defend America against all enemies, both foreign and domestic. Because of minimal mandatory national training in comparison to what is required of all natural born citizens, such illegal immigrants often have a more limited understanding of America's unique and exceptional heritage and culture. This type of policy creates a balkanized America containing parallel societies or rival nations within our own nation. Without a common culture and language, a nation cannot thrive and even exist for long.

Sometimes pro-amnesty types, such as Obama, like to quote scriptural passages that admonish God's people to be kind to the foreigner who was living amongst them (Exod. 23:9; Lev. 19:34; Deut. 10:19). However, these exhortations are merely talking about basic compassion towards the less fortunate in our midst. These less fortunate were those who are foreigners and yet legal citizens of Old Testament Israel. Nowhere in these passages is it ever even hinted that they represent those who entered the country illegally. These oft cited verses are not advocating illegal activity or porous borders. Also, these injunctions are part of the Mosaic Law, which was given exclusively to the nation of Israel (Ps. 147:19-20). Consequently, these injunctions are not directly binding upon any other nation such as the United States of America or even upon the church, which is distinct from Israel. [5] Also, when these injunctions were given, they did not contemplate dangerous realities that we see today, such as terrorists carrying weapons of mass destruction across porous borders for the purpose of doing physical harm to others within the host nation. Any nation has a right to enforce its borders if for no other reason than the self defense, protection, and preservation of its citizenry.

For these preceding seven reasons, Obama's unilateral executive decision is a bad deal for America. It is a loser any way you look at it. It is physically dangerous. It violates America's delicate Separation of Powers. It insults legal immigrants. It rewards law breakers. It damages an already fragile economy. It treats differing racial and national groups unequally under the law. Last but not least, it relies upon a distorted interpretation of the Bible. My hope and prayer is that Americans will see this executive order for what it is and will work legally to reverse it as well as demand better public policy from their current and future leadership.