Why the Whole Thing Stinks to High Heaven

(THE WORD ON POLITICS)—Last week the President of the United States via an executive order granted amnesty to at least five million people living illegally in our country. In other words, five million people who were formerly considered illegal aliens have now been granted the full rights and privileges of citizenship with the stroke of a pen. For at least seven reasons, this is a lose/lose situation for our once great country.

First, granting amnesty to illegals is physically dangerous. There is little doubt that many of those crossing the Mexican-American border to enter our county illegally are OTMs (other than Mexicans). In fact many are Middle Eastern, and some of these have entered our country illegally in order to commit acts of domestic terrorism. Michelle Malkin observes:

Let's not forget that the "beltway sniper" Lee Malvo, who killed ten Americans and also injured three during his 2002 shooting spree, was an illegal immigrant from Jamaica. After being arrested in 2001, he was not deported but rather was released without bond. Ten Americans would be alive today had he been properly deported. The President's recent executive order, with its added effect of giving even more an incentive to illegally cross America's porous border, will only increase the likelihood of more Lee Malvo-type incidents within the United States.

Second, last week's executive order puts us on a path more reminiscent of a totalitarian dictatorship than the free republic that we have enjoyed for over two centuries. Every junior high and high school pupil knows (or should know) that we have three branches of government in this country. While the legislative branch passes law, the judicial branch interprets law, and the executive branch merely enforces existing law. In fact, Obama, a former University of Chicago Constitutional Law lecturer, is on public record in admitting at least twenty five times that passing amnesty through the executive branch would violate the Separation of Powers concept that our Constitution calls for. 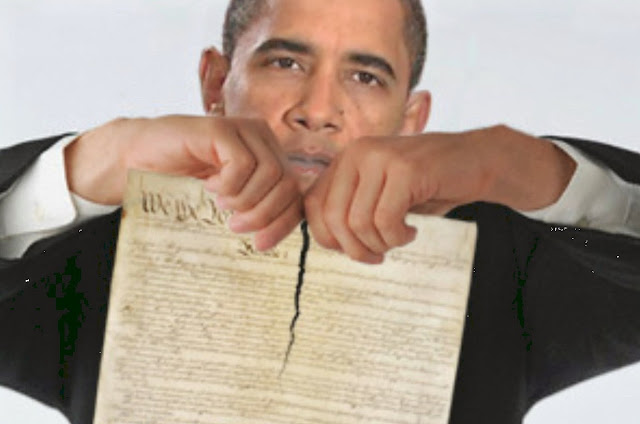 By accomplishing this legislative feat unilaterally through the executive branch, the President has usurped power that rightfully belongs to another branch, the legislative branch, of government. Even Georgetown University Law School Professor Jonathan Turley, not exactly a member of the "vast right wing conspiracy" due to his personal support of Obama's liberal policies, warns that Obama's action has concentrated too much power in the executive branch thereby placing America at a dangerous Constitutional tipping point. [2] While it is common to hear Obama's defenders argue that former Presidents, like Ronald Reagan, also passed executive amnesty, it is important to realize that they did so based on an actual statute legitimately passed by the legislative arm of government. Obama, by contrast, passed executive amnesty by making up law out of thin air. [3] What kind of precedent does such unilateral activity set for the future? Will the Obama Administration use this same unilateral legal maneuver to also get its way on other bad policies such as climate change and net neutrality? As is common with most subsequent rulers, future politicians will take this bad precedent and exploit it even further in their future decisions.

The dictatorial impulses of this President are seen not only in last week's unilateral political activity, but also in how easily he marginalized and even dismissed the defeat that his party and policies suffered in the recent midterms. Remember, it was Obama himself who conceded that his policies were on the November ballot. In a news conference following the midterms he stated, "To everyone who voted, I want you to know that I hear you. To the two-thirds of voters who chose not to participate in the process yesterday, I hear you, too." [4] Sarcastically I would say: I did not realize that election results were determined in this country by those who did not vote. This is certainly a first and it is news to me. Realistically I would say this is how dictators speak when they are inconvenienced by the voice of the people. While most common sense Americans instinctively knew that "Hope and Change" would end in a bad place, few envisioned that it would end in totalitarianism.

Third, the President's executive order represents an insulting slap in the face to the many immigrants who have patiently waited in a long line to become American citizens through the deliberately arduous process of legal immigration. The fact of the matter is that America is the most generous country in the world when it comes to immigration. America accepts more immigrants than any other nation on the planet. America accepts over 800,000 legal immigrants per year. We always look with disdain on the person who cuts to the front of a long line. Why? Such cutting is insulting and disrespectful to the person who has played by the rules by waiting in the long line. Yet, Obama's executive action has allowed at least 5 million people to cut to the front of the line in front of all the aspiring legal immigrants who have been standing in the line for a very long time. It is also insulting to the many legal immigrants who once patiently and successfully endured the long line.

Fourth, the President's executive order rewards law breakers. There is a reason these folks are called illegal immigrants. They attained this status by entering the country illegally, in violation of America's existing immigration laws. If someone enters the country illegally, what confidence can we really have that they will abide by, as well as obey, the rest of America's laws? Granting amnesty also sends the message to the many other foreigners throughout the world that they too can enter America illegally and suffer minimal, if any, penalty once they arrive. Beyond this, if neither the President, in granting the executive order, nor the once illegal aliens themselves, have to abide by existing law, then it will not be long before our citizens begin to reason to themselves that they also do not have to abide by existing law. Indeed, Senator Tom Coburn warned of this societal breakdown in the days leading up to Obama's infamous executive order when he predicted violence in its aftermath. [5] The recent burnings and lootings in Ferguson, MO due to the discontent by some of the refusal of the Grand Jury to indict police officer Darren Wilson in the August killing of Michael Brown are perhaps the fulfillment of Coburn's prophecy.

In sum, Obama's unilateral executive decision of last week is a bad deal for America. It is a loser any way you look at it. It is physically dangerous. It violates America's delicate Separation of Powers. It insults legal immigrants. It rewards law breakers.