Who Chooses Whom in Salvation?

A. First, a couple of disclaimers are in order:

All teachers of the Scriptures that I've encountered believe that people have free will. They are not robots—for it would mean nothing for them to respond in love toward God if their love was not a real choice. The issue, I believe is not whether people have free will, but what does the Bible teach is the nature of their free will after the Fall. Here, the Bible seems clear: man's fall into sin was such that without divine intervention, he is unwilling (indeed unable) to seek after God (Ps. 14:2-3; 53:2; Rom. 3:11; 8:7; 1 Cor. 2:14). Adam and Eve were in an ideal position: untainted by the Fall. Even so, they rejected God. Now the unsaved, who are in Adam—having a free will now in a lower position than their "parents" Adam and Eve and having their entire being twisted by sin—are unable (indeed unwilling) to choose God without divine intervention. This is why believers are said to be "born of God" (John 1:13; 1 Jn. 3:9) or "born of the Spirit" (John 3:5). It is God and His Spirit which do the birthing process leading to salvation (John 6:44; James 1:18).

I do not see the Bible to teach that God predestined everyone. Predestination only applies to those "chosen" by God who are also called "the elect" (Mat. 20:16; 22:14; 24:31; Acts 13:48; Rom. 8:29-30; John 6:44,65; 13:18; 15:16; 17:2,6; Acts 13:48; Rom. 1:7; 8:30). Also foreknowledge in Scripture is not merely the act of knowing ahead of time what people would do. It includes a determinative element (which is reflected by the terms "foreordained" or "predestined"). The Bible teaches that God not only knew, but determined who would choose Him. It was not merely a matter of Him looking down through history, seeing who would "choose Him" and then going back before the foundation of the world and declaring what He saw would come about. It was a determination at the beginning (Eph. 1:4; 2 Ti. 1:9; Rev. 13:8). Any other view (e.g., that He merely observes who "happens" to respond to salvation) cannot explain perhaps the most important passage on the issue before us in all of Scripture: Romans 9:1-24. The entire point of Paul's comparison of Jacob and Esau (Rom. 9:10-16) is that the only difference between the two children (twins, born of the identical act of conception) is explained in God's sovereign determination according to His will:

...(for the children not yet being born, nor having done any good or evil, that the purpose of God according to election might stand, not of works but of Him who calls), it was said to her, "The older shall serve the younger." As it is written, "Jacob I have loved, but Esau I have hated." (Romans 9:11-13)

Those who elevate man's "free will" over God's sovereignty will never be able to explain what Paul is writing about here. 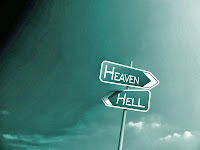 I do not endorse the view of "double predestination" that God has predestined (caused) men to reject Him resulting in a place in Hell. Instead, I believe the Bible (and especially Romans 9:18-24) teaches that all men are unable to respond to God without divine intervention. God then, chooses some (those who are called, the elect) and passes over others—allows their natural sinful condition of continued rejection of God to run its course. Those who are saved, He brings to life—they are "born of God ... born of the Spirit." The others remain in their natural condition and require no intervention on God's part to wind up in the ultimate God-rejecting destiny. Thus, He does not "predestine" the non-elect in their rejection. Those saved are saved by the active interaction of God in grace. Those who are not saved continue along as they do while God remains passive on their behalf. Does this seem just in our limited view? No. Which is precisely Paul's point in Romans 9:17-24. God's sovereignty trumps our notion of justice and equity: His ways are simply higher than ours. His will is inscrutable, perfect, just, and holy—and any tendency on our part to judge Him based on our puny intellect is ultimately sin. His will is not subject to—does not bow to—our logic. Instead, we bow in submission to what He has revealed in Scripture and know that some day we may be able to understand this tension better (just like the notion of the trinity).

The statement of belief of our church attempts, in as simple terms as possible, to get at the heart of Romans 9. God chooses those who are saved and passes over others. He does not "sovereignly make [others] reject Christ in unbelief." The fallen nature of man's will already guarantees, apart from any intervention by God, all men throughout history would reject Him. He contributes nothing in their rejection. We mean that every single person throughout history gets saved by God's intervention and that alone. This does not reject or make light of the accompanying Biblical truth that man's responsibility is to respond in faith. Can I reconcile these teachings of God in a way that satisfies my limited intellect. Again, the answer is "No." But that does not change the fact that the Scriptures clearly teach both: God chooses/elects/predestines His own. Yet all who are saved must exercise faith. The implication then, is that the faith that sparks a response by man is in response to the work of the Spirit. The phrase in the doctrinal statement of our church which states, "apart from foreseen human merit or response," is simply recognizing that the determinative element in who is saved and who is not is ultimately God, not man. Therefore, those who are saved can only lean on grace: they can never say that it was their superior faith or sensitivity or response over that of other men which earned them salvation. This is why salvation is by grace through faith—it is entirely a work of God.

Your questions seem to reflect an Arminian perspective where God has no determinative role in salvation. He merely draws all men and some—those who have something extra that other men don't have (faith, sensitivity to God) "choose Him" and are saved because of it. This view appeals to our limited human logic and "makes sense." The only problem with it is that the Bible has many passages which contradict this view. This view may satisfy our limited intellect, but at the expense of undermining deep theological mysteries and their attendant riches. It also leaves us insecure (we can lose that which we thought we had) and places the ultimate focus of salvation history in man's fallen whims rather than God's perfect sovereignty. Although there is certainly a mysterious tension between God's sovereignty and man's responsibility, when we pit the two at odds in ways we can't understand we err the more when we fail to acknowledge that it is ultimately God's sovereignty—not man's fallen nature eternally bent against God—which determines salvation history.

Another writer captured it well:

"...many of those who insist that when people come to study the doctrine of the Trinity they should put aside all preconceived notions and should not rely simply upon the unaided human reason to decide what can or cannot be true of God, and who insist that the Scriptures should be accepted here as the unquestioned and authoritative guide, are not willing to follow those rules in the study of the doctrine of Predestination." [1]

I suspect from the tone of your questions that you are of the view that all men are equally capable of coming to salvation and that God merely "looks ahead" to see who "chooses Him" and then "chooses them" in return. This concept is foreign to the Bible which clearly states that it is God who does the choosing and that apart from His choosing no one would be saved. Thus, by His grace, He saves some by intervening to bring about the new birth. Others continue onward in their fallen condition without His intervention.

Can I explain election in a way that will satisfy human curiosity and our fallen view of justice? No. But I see clearly that Paul dealt with this issue at length and warned us not to judge God in His perfect handling of those who ultimately perish (Rom. 9:20).

For additional background on this key passage in Romans 9, I might suggest this audio teaching I produced several years ago.