Is My Job More Important Than a Spotted Owl?

(The Word on Politics)—How do I know if the person I am voting for, as he or she pursues public office, properly represents a biblical worldview? How do I determine who, among the various competing political candidates, better reflects biblical values?

If you are looking for answers to these questions, this series of articles will be of great benefit to you.

For purposes of organization, these issues can be categorized under the following headings: economic issues, social issues, and foreign affairs matters. In my first article I wrote about the importance of a candidate's philosophy of governance. In my second and third articles, I introduced the topic of economic matters, which I will wrap up in this fourth article. Next time, we will turn our attention to social issues.

With each issue I have included some parenthetical Bible verse references in order to demonstrate to the reader that these preferences are not uniquely mine, but rather are derived from the pages of God's Word. While these issues are often irrelevant to the thinking of modern man, they are extremely important to God. 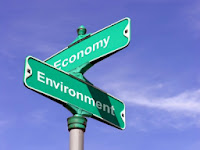 In addition, does the candidate through rejection of true worship of God instead embrace earth worship (Rom. 1:22-23, 25), otherwise known as the Gaia Hypothesis? In other words, has common-sense environmental stewardship given way to pantheism and environmental extremism? If so, he will likely impede environmentally safe domestic fossil fuel and oil production. Such domestic drilling has the benefit of reducing America's dependence upon foreign sources of oil that are often controlled by governments that do not have our nation's best interests at heart and are overtly hostile to America's national existence and unique way of life. The worship of nature in lieu of worshipping the true God also leads to other lopsided priorities, such as laying off an entire industry of loggers in order to preserve the spotted owl. This type of imbalance places plant and animal life above and beyond human beings in significance and importance. A basic study of the Scripture reveals that God's priorities are the exact opposite (Gen. 1:26-28; Ps. 8:4-8; Matt. 6:26; 12:11-12).

Furthermore, because the Bible warns against the bondage associated with excessive debt (Prov. 22:7) and also categorizes unpaid debts as theft (Ps. 37:21), will the candidate continue to add to our runaway national deficits and debt? Increasing our national debt not only steals from future generations through institutionalized theft, but it also compromises America's economic well-being through the devaluation of the dollar and runaway inflation (Amos 8:5).

In a similar vein, because respect for America's founding documents are the best insulation against runaway government spending and concentration of power into too few hands, will the candidate favor appointing individuals to the judicial branch of government who actually care about the original intent of our Constitution? If not, he may allow jurists onto our courts who see our Constitution as merely a "living and breathing" amorphous document. Virtually anything can be read into such a meaningless document in order to push our nation in a big-government socialistic direction.

Thus, a logical inquiry of any candidate pursuing elected office is whether they embrace the limited-government concept as expressed in the U.S. Constitution, or do they instead favor seeing the power of the state grow beyond the government's limited, enumerated powers? This expansion in turn inevitably leads to the perpetual stifling of political and economic freedom through ongoing wealth confiscation and even cradle to grave surveillance and data collection upon law abiding citizens.

Scripturally, those embracing the concept of a maximum, omnipotent, omnipresent government, as opposed to limited government, are reminiscent of the future Antichrist (Rev. 13:16-18) and his typological prefigurements (Gen. 11:1-9). While government in general is to be respected and submitted to as a God-ordained institution, the Bible nowhere teaches the notion of unlimited submission to a Godless, corrupt, and power hungry state (Exod. 1–2; Josh. 2; Dan. 3: 6; Acts 5:29). Thus, a candidate's thoughts and understanding of limited government is a key sign revealing his biblical orientation or lack thereof.