Marriage of the Lamb and the Marriage Supper

Q. The Bible mentions both the Marriage of the Lamb and the Marriage Supper. Are these part of the same event? And will they both take place in Heaven? 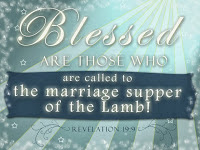 Marriage of the Lamb and the Marriage Supper

A. This subject is one of those minor issues about which many able theologians differ. In the passage describing these events, the Bible mentions both the marriage of the Lamb (Revelation 19:7) and the marriage supper (Revelation 19:9). As this portion of Scripture appears after the Church has been taken to Heaven in the Rapture, but before we return with Christ to the Earth at His Glorious Appearing, it leads many to the conclusion that both take place in Heaven during the Tribulation. We, however, maintain that the marriage will take place in Heaven during the Tribulation, while the marriage supper will take place on Earth during the Millennium, after Jesus' triumphant return.

This position would coincide with the stages of a marriage ceremony in ancient Israel. First, there was the betrothal, the pledge of marriage that was arranged when the marital parties were very young, perhaps even before their birth, and had probably never seen each other. The parents would do the arrangements; paperwork was signed; and a dowry was paid. In the case of the Church, God has chosen us as the Bride of Christ (Ephesians 1:4) and the dowry has been paid—the death of Christ on our behalf (1 Corinthians 6:20).

Second, usually many years later, would be the presentation of the bride. The bride would be led to the groom's home; the proper paperwork would be presented; and a private marriage ceremony would be conducted. In the case of Christ and the Church, this will take place after the Rapture, when the Church is taken to Heaven. These are the events described in Revelation 19:7-8 as well as John 14:1-3.

Finally, there is the celebration, a great public festivity that will include many guests. This is the chief reason we believe the Marriage Supper will take place on Earth after Christ's Second Coming. The guests will include Old Testament saints and Tribulation saints, both of whom will be resurrected by that time, as well as the nation of Israel and the Gentile nations of the world who inhabit Christ's Millennial Kingdom.

Finally, an Earthly-based Marriage Supper is the only clear way to distinguish the Bridegroom (Christ), the Bride (the Church), and the ten virgins (Israel) in the passage in Matthew 25:1-13, the Parable of the Ten Virgins. Christ is not coming to marry all ten (or even five) of these girls. They are attendants at the wedding. Only the Church is the Bride.