Gold Treasure Trove Unearthed at Base of Temple Mount

(Washington, D.C.)—Readers familiar with my novel, The Copper Scroll, will recall the enormous treasure trove of gold found underneath the Temple Mount. The novel was based on an actual ancient description on a mysterious Dead Sea Scroll—reported on the front page of the New York Times on June 1, 1956—that was made of copper, describing what could be billions of dollars in treasures hidden in obscure locations throughout Jerusalem and the land of Israel.

The treasures—which some speculate may come from the Second Temple period—have never been found. It was a fascinating project to research, including going to see the actual copper scroll at a museum in Amman, Jordan. The result was a thriller inspired in part from Raiders of the Lost Ark, partly from National Treasure, and partly from The Bourne Identity, but mostly on the true story of the scroll and its mystery.

I loved working on that book. It's one of my favorites, and I've always thought if a major motion picture was ever made of one of my thrillers, it would most likely be The Copper Scroll.

That's why this article so intrigued me this morning.

"Hebrew University researchers on Monday announced the discovery of a rare trove of Byzantine-era gold and silver artifacts, the most impressive of which is a 10-centimeter solid gold medallion emblazoned with a menorah and other Jewish iconography,” reports the Times of Israel.

"The find, unearthed in the area adjacent to the Southern Wall of the Temple Mount known as the Ophel, was dated to the early 7th century CE, in all likelihood the time of the brief Persian conquest of Jerusalem.” 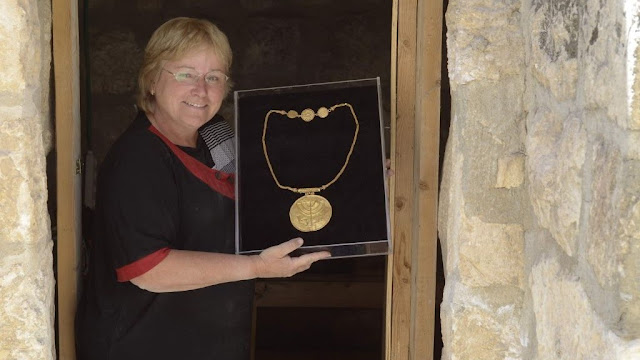 “Professor Eilat Mazar described the discovery as a unique find with ‘very clear Jewish symbols,'" notes the Times. “She posited that the hoard of gold and silver objects, found beneath the floor of a Byzantine-era house meters from the massive walls of the Temple Mount, was brought by Jews who returned to the city after the Persians conquered it from the Byzantines in 614 CE.”

“I have never found so much gold in my life!” she said with obvious excitement at a press conference on Mount Scopus. “I was frozen. It was unexpected.”