Former Spanish Foreign Minister and former Senior Vice President to the World Bank, Ana Palacio, believes that the European Union has the influence to secure a peace agreement between Israel and the Palestinian Authority. Taking into account the many threats the Jewish state now faces, from the revolution in Egypt, to the civil war raging in Syria and the prospect of a nuclear Iran in the not too distant future, she believes that European intervention and even integration with Israel itself could be a possible solution to the ongoing conflict in the Middle East.

Although the European Commission's recent ruling prohibiting the application of future agreements with Israel to territories beyond the 'Green Line' has caused consternation in the Israeli government, there are those who think that this proves the EU possesses the necessary influence to bring about a peace agreement in the region. An additional strengthening of economic ties with Israel, and even membership of the EU itself, could be offered to help 'sweeten the deal' with the Palestinian Authority...

(Project Syndicate)—"The easiest option would be conditional liberalization of trade in services within the existing framework of the EU-Israel Association Agreement. But the challenging strategic environment and legacy of failed negotiations call for a more daring approach: The EU should take the initiative in persuading its partners in the European Economic Area to offer Israel membership, conditional on the completion of a peace agreement. Beyond deepening the EU's internal market, such a move would serve as a powerful symbol of the value and potential of the EU-Israel relationship, opening the way to further integration in the future.

This is not the first time such an idea has been put forward. Back in 2008, two professors suggested that the admission of both the state of Israel and the Palestinian Authority into the European Union could help resolve the Middle East conflict. Richard N. Rosecrance, a professor belonging to the Belfer Center at Harvard Kennedy School, and Ehud Eiran, who served in the Prime Minister's office in Israel, suggested that membership of the European Union could guarantee Israeli security and legitimacy while offering Palestinian refugees the right of return to their lands thanks to Europe's open-borders policy. The EU would also benefit from the deal, expanding its sphere of influence in the Middle East and north Africa, and contributing to the political stability of the region.

(Christian Science Monitor)—"In fact, the dual identity of a supranational entity comprised of peaceful national states holds the answer for both sides' most profound concerns. For Israelis, EU membership offers physical security and permanent legitimacy. For Palestinians, membership means a territorial settlement, including a return, of sorts, of their lands through the new joint European source of security and authority over them.

Such an arrangement also holds significant benefits for Europe. It would contribute to political stability on its eastern and southern flank. If successful, it might even open a path for EU members to certain North African states, thus limiting the frustrations of millions of would-be immigrants to leave their unstable region and go to Europe.

Union for the Mediterranean

"Within every man and woman who lives on the shores of the Mediterranean sleeps the memory, nostalgia, for the unity lost 15 centuries ago.”

Indeed if you look at a map of the old Roman Empire compared to the regions covered by the new 'Union for the Mediterranean', you will see quite a similarity. 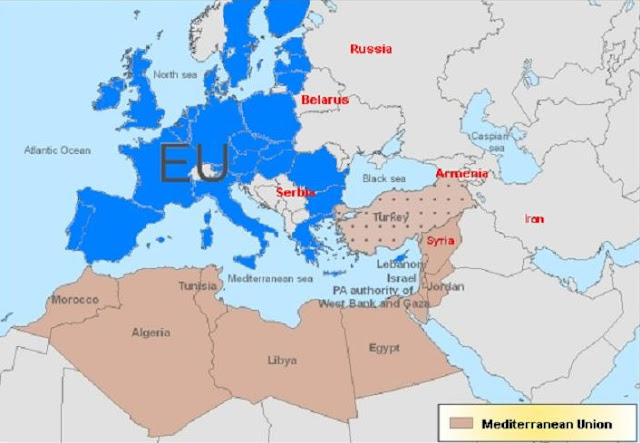 It is amazing that nearly 2000 years ago, the tiny nation of Israel was under occupation of the Roman Empire. History has come full circle. Today, the leaders of the modern nation of Israel are looking more and more towards Europe for the answers to their problems. And that's what the Bible predicted would happen. Daniel's prophecy foresaw four great world empires that would bear rule over the Jewish people in the land of Israel. Babylon, Medo-Persia, Greece and Rome. And a final world empire, that would be a revived form of the fourth (Daniel 2:41-42). The Bible predicts that the leader of this final world empire will strengthen a covenant between the nation of Israel and many people for seven years. Today the European Union is in that prime position, ready to strengthen a future peace agreement. The Bible states that the man to do this will be the prince, or the ruler, of the people that destroyed Jerusalem and the Temple in 70 AD (Daniel 9:26). That was the Romans.

Of course there will be no peace. The Bible says that when they shall say peace and security, sudden destruction will come upon them as travail upon a woman with child, and they shall not escape (1st Thessalonians 5:3). Half way through the seven year period, the Roman ruler will turn his back on Israel and the agreement, and thus will begin the time of Jacob's trouble (Jeremiah 30:7) and ultimately the battle of Armageddon (Revelation 16:16). Praise God this is not the end of Israel and the Jewish people, but the Lord has promised to save His people (Zechariah 12). And the Prince of Peace will bring lasting peace to this war-torn planet. What a day that will be!

For unto us a child is born, unto us a son is given: and the government shall be upon his shoulder: and his name shall be called Wonderful Counselor, The mighty God, The everlasting Father, The Prince of Peace (Isaiah 9:6).