ACLJ to IRS: Quit Stalling and Approve Our Clients' Applications

A Christian law firm that defends religious freedom and the Constitution is rejecting the Obama administration's offer of an "expedited review" for conservative groups targeted by the IRS, saying the proposed standard was "created ... out of thin air."

As reported on OneNewsNow, the American Center for Law and Justice has filed a federal suit representing 41 tea party and conservative organizations that it says have been unlawfully targeted by the Internal Revenue Service. Some of the groups have been waiting for years for the tax collecting agency to approve their tax-exempt applications—several for almost 650 days and, in one case, 1,297 days.

Last month the IRS offered to expedite the process for seven organizations seeking 501(c)(4) status by creating an arbitrary 60/40 standard which would require them to agree to devote 60 percent or more of their time and expenditures to promote social welfare and 40 percent or less on political activity.

Jordan Sekulow, executive director of the ACLJ, finds the offer "deeply flawed" as well as unacceptable.

"We have been instructed by our clients to reject the IRS offer for expedited review because these seven clients have been awaiting determination for years," he tells OneNewsNow. "We request that the IRS complete its review of their applications and make a final determination immediately. They want what they've been waiting for and what they applied for: the IRS to certify their groups."

According to the ACLJ spokesman, the IRS’s proposed solution does not address the real problem at the federal agency—what he describes as "a pervasive and systematic assault" on conservative organizations. "The IRS remains an agency incapable of self-governance or self-correction," he adds in a press release. 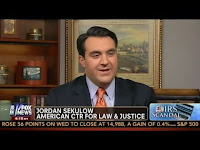 In the days following the revelation that the IRS had targeted conservative groups—particularly those with "tea party" or "patriot" in their name—Senator Ted Cruz (R-Texas) suggested it was time to completely abolish the Internal Revenue Service. Sekulow sees a great deal of merit to Cruz's proposal.

"Mid-term elections are coming up [and] we'll see if there are enough of those elected who realize that this has gone on too long," he states. "It's out of control. The truth is the IRS deserves to be abolished. They've done it to themselves."