I just had the opportunity to speak at the Messiah Conference in Grantham, Pennsylvania on a topic that is dear to me. I know that many of you feel as I do about Israel so I thought I might share some of that message here with you.

With Egypt and Syria in flames it is important to remember that the little nation of Israel remains a relatively calm oasis, in the midst of the cauldron that is the Middle East. It is an oasis of democracy, an oasis of economic stability and contrary to some reports, an oasis of religious freedom. But what followers of Jesus should remember most is that Israel today is an emblem of God's Word of promise being fulfilled in our lifetime.

That promise came through the prophet Isaiah:

"Fear not, for I am with you; I will bring your descendants from the east, and gather you from the west; I will say to the north, give them up! And to the south, do not keep them back! Bring My sons from afar, And My daughters from the ends of the earth—Everyone who is called by My name, Whom I have created for My glory; I have formed him, yes, I have made him" (Isaiah 43:5-7).

Beginning in the late 19th century the modern Zionist movement sought to reestablish the homeland of the Jewish people in the place God had promised to their forefathers. (See Genesis 15). Against all odds, out of the ashes of the Holocaust, the modern state of Israel was reborn in 1948. God was fulfilling His promises made to Abraham, confirmed through Isaiah and the prophets, bringing it to pass in our day.

Many believers in Jesus rejoiced to see Jews from around the world, from the north, south, east and west, returning to their ancient homeland. When, in 1967, during the famous Six Day War, the ancient city of Jerusalem was recaptured by the nation of Israel, those who expected the prophecies to come to life were even more excited. Jerusalem was once again under Jewish autonomy after more than 2000 years. This was especially significant in light of the words of Jesus that Jerusalem would be "trampled by the Gentiles until the times of the Gentiles are fulfilled" (Luke 21:24).

Many prophecy buffs were convinced that all this indicated that the times of the Gentiles were coming to a close, and the return of Christ was just around the corner. Unfortunately some began to predict specific dates concerning His return, most famously in 1988 and 1994. When these predictions failed to come true, some Christians became disillusioned and began to lose enthusiasm concerning God's promises to regather His people Israel.

Other voices raise doubts as to whether what is happening in Israel today has anything to do with God's promises. They argue that since Israel, for the most part, has not yet fully embraced Jesus as Messiah they have no particular claim to the Land.

I believe this is a mistaken and shortsighted view. After all, during biblical times for much of the period Israel was dwelling in the land, she was in sin and unbelief and yet God saw fit to allow His people to dwell in the Land for many years. It was only on God's say-so that Israel was dispossessed from the Land. Nowhere do the prophecies say that faith in Jesus is a prerequisite for her return, though such faith is likewise predicted for the end times.

I wonder, can anyone truly believe that the Jewish people could have possibly returned to the land of Israel against God's explicit will? Or survive the attempts by vastly larger nations to destroy or drive her back out?

God said that the reason He would bring back His sons and daughters from the east, west, north and south was "for My Glory." It is not because of divine right but by divine mercy that Israel is now back in the Land and it is all to the glory of God. But you see, the process of the fulfillment of His promises is still ongoing.

The Regathering of the Jewish People to the Land

Significant demographic trends have continued to demonstrate that the fulfillment is still underway. According to the most recent population study of the North American Jewish Data Bank, released last Fall, while Jewish populations have remained relatively stable in Europe and the United States, growth in Israel has been explosive. (See figure below) 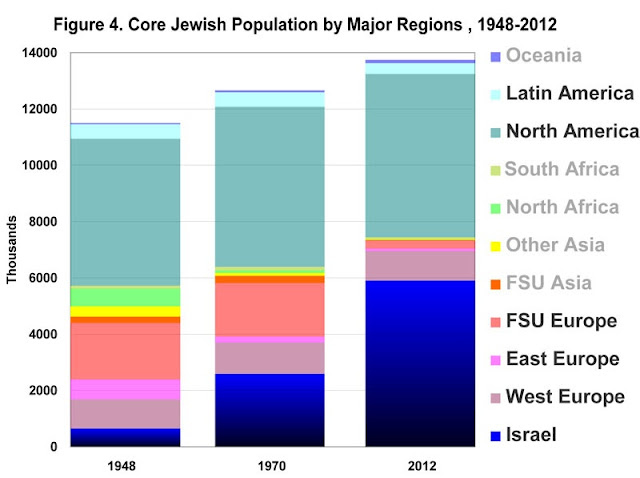 In part, this has been the result of massive immigration of Jews from the former Soviet Union. From 1991 to 2001, over 1,000,000 Russian-speaking Jews immigrated to Israel. In fact, now there are more Russian-speaking Jews in Israel than outside of Israel. What is more, there are now more Jews in Israel (5.9 million) than there are in all of North America! (5.4 million). This is extraordinary! If trends continue soon, there will be more Jews living in Israel than there are in the entire world outside of Israel.

The day Isaiah envisioned is upon us and so we can know that all the events God warned us about as well as the rest of His promises in these last days will likewise come to pass.

But let's be clear, the regathering of the Jewish people to the Land is part of God's much greater purpose, first to show His glory and second to bring His people back to Himself through faith in the Lord Jesus. That is why the Body of Messiah should not only rejoice that God is fulfilling His promise to gather His people back to the Land, but we should also redouble our efforts to make Christ known. Only through Him will we see the resurrection power of God applied to the lives of each son and daughter of Abraham.

As surely as God is bringing the Jewish people back to the Land, so will He bring them back to Himself. As the apostle Paul declared:

"For if their being cast away is the reconciling of the world, what will their acceptance be but life from the dead? For I do not desire, brethren, that you should be ignorant of this mystery, lest you should be wise in your own opinion, that blindness in part has happened to Israel until the fullness of the Gentiles has come in. And so all Israel will be saved, as it is written: 'The Deliverer will come out of Zion, and He will turn away ungodliness from Jacob; for this is My covenant with them, when I take away their sins'" (Romans 11:15, 25-27).