A clear sign that Islamic supremacist paranoia is taking hold in Turkey: "Turkey suspects bird of being Israeli spy," by Amir Ben-David for Ynet News, May 15: 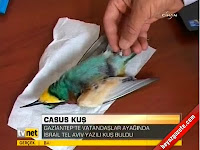 Turkish authorities believe that they have found a bird used for espionage purposes by Israel, the country's media reported.

According to a Tuesday report in Yedioth Ahronoth, an investigation to that effect was launched in Ankara several days ago, after a farmer discovered a dead Merops Apiaster, commonly known as the European Bee-Eater, in his field. The bird had a ring reading "Israel" on one of its legs.

The band, however, was not the most damning piece of evidence against the bee-eater: Its nostrils were.

The bird-beak in question reportedly sported "unusually large nostrils," which—combined with the identification ring—raised suspicions that the bird was "implanted with a surveillance device" and that it arrived in Turkey as part of an espionage mission.

The bird's remains were originally handed over to the Turkish Agriculture Ministry, which then turned them over to Ankara's security services....