An Iranian newspaper tied to Supreme Leader Ali Khamenei recently boasted that the U.S. has “rejected” Israel over the past three months. This belief could have disastrous consequences. The author writes that the only “obstacle” remaining is the Saudi Royal Family and once it falls, Israel can be destroyed.

“It can be said that within the last 60 years, this is the first time that the Zionist regime, since its illegal inception, has had to endure rejection by the West over its vision and interest in the region,” wrote Sadollah Zarei, according to a translation by Reza Kahlili.

It’s easy to see why Iran has picked up on this fact, which Democrats have desperately tried to deny throughout Obama’s tenure. Headline after headline is about the U.S. trying to hold Israel back. In March, an anonymous administration official told the Washington Post, “We’re trying to make the decision to attack as hard as possible for Israel.”

There’s been a steady stream of leaks from administration officials potentially damaging Israel. On March 28, Foreign Policy reported on the alleged existence of a secret agreement between Israel and Azerbaijan making the latter’s airbases available for a potential strike on Iran. The results of a classified war game simulating a conflict between Israel and Iran that showed hundreds of U.S. casualties made its way into the press. Another report claimed that Israel is using members of the MEK Iranian opposition group to target Iran’s nuclear scientists.

The author attributes the change in U.S. policy to recognition of Iranian strength because of the Arab Spring, which he refers to as the “Islamic Awakening.” He specifically mentions the removal of Egyptian President Hosni Mubarak and the subsequent takeover of the country by Islamist forces. Zarei also claims that the U.S. is “on the verge of accepting the Iranian nuclear program” and points to statements by Israeli officials that Iran is “rational” as proof that the Israeli government is weakening. 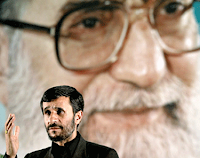 The Coming Is upon Us

Don’t let the fact that Iran is Shiite and the Muslim Brotherhood and Salafists are Sunni fool you. The two forces may be battling in Syria, but the Iranian regime still believes that its rise is a fulfillment of Islamic End Times prophecy. Last year, Ahmadinejad’s office produced a documentary titled The Coming Is upon Us. It outlined how it views its role in Islamic prophecy and plainly states that the Muslim Brotherhood’s ascendance is “in accordance with the Hadith.”

In February, Khamenei declared, “From now on, in any place, if any nation or any group confronts the Zionist regime, we will endorse and we will help.” This should be seen as an overture to the Muslim Brotherhood. The film states that the destruction of Israel is preceded by the creation of an anti-Western Arab coalition.

Arguably the most important line in Zarei’s column is this: “With diminishing support for Israel and with the (upcoming) collapse of the monarchy in Saudi Arabia, there won’t be any obstacles left facing Iran with its policy of annihilation of Israel.”

This statement echoes what the apocalyptic documentary said. In The Coming Is upon Us, the regime teaches that the death of Saudi King Abdullah will be a fulfillment of prophecy and one of the last precursors to Israel’s destruction. Saudi Arabia will be consumed with internal turmoil until the Mahdi appears to vanquish Islam’s enemies. King Abdullah is at least 87 years old.

In August, a Hezbollah MP in Lebanon, retired Brigadier-General Walid Sakariya, stated that two other things must happen before the final war to destroy Israel can begin: U.S. forces must leave Iraq and the Assad regime in Syria must be secure. The first objective has been completed.

President Ahmadinejad recently stated the war is not necessary to destroy Israel if the Arab world unites against it. However, the voices describing such a war in detail are getting louder.

In February, the deputy-commander of the Iranian military announced a change in policy. “Our strategy now is that if we feel our enemies want to endanger Iran’s national interests, and want to decide to do that, we will act without waiting for their actions,” he said.

Around the same time, the director of the parliament’s research institute, Ahmed Tavakoli, said Iran should attack Israel by the end of the year, urging the regime to take advantage of the political climate in the U.S. Tavakoli said that Iranian missiles could pummel the coastal area to the south of Tel Aviv and Jerusalem in order to degrade Israel’s retaliatory capacity. He said that the Dimona nuclear reactor and a smaller reactor south of Tel Aviv must also be destroyed.

That same month, the former governor of Kish Province and pro-Khamenei strategist, Alireza Forghani, went even further and outlined a strategy of genocide against the Jewish population of Israel. His analysis was reposted at several other regime websites, most notably the Fars News Agency operated by the Revolutionary Guards.

Forghani said that Shahab-3 missiles could destroy Tel Aviv, Jerusalem and Haifa, eliminating 60% of the Jews in Israel. Nuclear reactors, air force bases and airbases should be targeted in the first wave by Sejil missiles. Secondary targets would include power plants, communication sites, transportation sites and sewage treatment facilities. Altogether, he said, it would take about nine minutes. He strongly recommended that the attack happen before 2014. That is when Ahmadinejad’s term ends.

This genocidal madness was endorsed by Ayatollah Mesbah-Yazdi, an influential hardline cleric. Reza Kahlili reports that he recently ruled that all Israelis who did not oppose the country’s “vicious crimes” are legitimate targets. Mesbah-Yazdi has written in support of Iran acquiring nuclear weapons and one of his disciples issued a fatwa in 2006 justifying their use.

Policymakers need to recognize that public tensions between the U.S. and Israel and displays of American weakness reinforce the regime’s beliefs. In The Coming Is upon Us, the regime uses quotes from U.S. officials stating that there is no viable military option against Iran as proof that prophecy is being fulfilled.

No good comes from making Iran believe that the U.S. isn’t interested in defending Israel.