Following years of devastation under the dictatorship of Saddam Hussein and the ensuing American invasion of Iraq, archaeologists are beginning to work on ancient Babylonian sites and hope to save the ruins of the biblical Tower of Babylon and learn how it was built before it crumbled under the weight of confusion.

As a first step, experts are working on a plan to prevent further deterioration of the mud-bricked ruins which were damaged by Saddam's personal building projects. 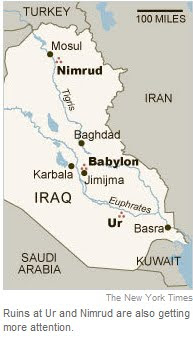 The meticulous work by archaeologists to preserve the mud-bricked Tower of Babel in Iraq is evidence that Bible prophecy will be fulfilled.

For several decades, the late Iraqi dictator Saddam Hussein worked to restore the site of biblical Babylon which included the mud-bricked building of the Tower of Babel. Since the war torn nation of Iraq is working to restore its country to the glory days of this Middle Eastern state in many areas, they have arranged for archaeologists to work to save the ruins of the ancient biblical site.

The Bible records the destruction of the Tower of Babel when the people of the world at that time who only spoke one language were confronted by a heavenly visitor and the tower was destroyed by the confusion of one language becoming many languages, Genesis 11. This account of Babylon's beginnings found in Genesis 11 is only the start of a significant history for this city. Babylon is where the Jews were held captive for 70 years, II Chronicles 36. Babylon was the city where Alexander the Great became the leader of the known world. Babylon is also the city where the Apostle Peter traveled to start a church to reach that part of the world, I Peter 5:13. Babylon will also be the headquarters for a world economic center and its leader, the Antichrist, Revelation 18. Babylon is the city that will be destroyed in one hour, Revelation 18:10, 17, 19. This will be a total destruction and forever, Isaiah 13,14, Jeremiah 50, 51, and Revelation 16:17-21.

Archaeologists working to preserve the city of Babylon is indeed setting the stage for Bible prophecy to be fulfilled.

Babylon Ruins to be Restored after Neglect - Will Iraqis Come Together? - Gather.com

Babylon Ruins to Regain Past Mesopotamian Glory - The Epoch Times