Today the Left is marked by equal doses of doom and gloom, irrationality and delusion. It operates in a closed universe in which reality has no place and opposing views are systematically ignored.

The Left's defeatism was brought home to me last Thursday during the Ariel University Center of Samaria's conference on Law and Mass Media. There I participated in a panel entitled, "Is the idea of a 'two state solution' feasible or doomed to failure?"

The first two speakers on the panel were Dr. Martin Sherman from Tel Aviv University and myself. Sherman explained in great detail how a Palestinian state in Judea, Samaria and Jerusalem will imperil Israel.

Without control over these areas, Israel will lack defensible borders. And given that there is no Palestinian leadership willing to accept Israel's right to exist, this strategic vulnerability will invite a war that Israel will be hard-pressed to survive.

Both Sherman and I explained at length that due to the Palestinian and the larger Arab world's rejection of Israel's right to exist, the "two-state solution" policy paradigm is delusional. It is not a policy paradigm. It is a fantasy. A debate about the two-state solution is not a policy debate, but a debate about the attractiveness of a pipe dream.

Our point was emphasized last week in an op-ed by Deputy Knesset Speaker MK Ahmad Tibi in the Washington Times. Tibi called for the Obama administration to end US support for the Jewish state. Instead of supporting Israel, Tibi asked the US to lend its support to support the partition of the land west of the Jordan River between a Jew-free Arab state of "Palestine," and a non-Jewish state in the rest of the area.

Given our arguments on the panel, and Tibi's effective international declaration of war against Israel in the name of its Arab community, one might have thought that at the Ariel conference, our fellow panelists from the Left would have been hard pressed to maintain their allegiance to the two-state formula. Then too, the fact that the PA's chief negotiator Saeb Erekat published an article in The Guardian two weeks ago in which he implicitly called for Israel's destruction, one could be forgiven for thinking Ma'ariv's former opinion editor Ben Dror Yemini and Shaul Arieli from the EU-funded Council for Peace and Security might have attenuated their support for Israeli land giveaways.

But one would be wrong for thinking that. Abiding by the Left's standard practice, rather than contend with opposing views or reality, our fellow panelists pretended we didn't exist.

I devoted most of my time to discussing a policy that is not based on fantasy. Such a policy, which I call the Stabilization Plan, (and here), involves a mix of military and law enforcement operations, a political and international law offensive, and the application of Israeli law in the Jordan Valley and the major blocs of Israeli settlements in Judea and Samaria. As I said in my presentation, the policy has advantages and disadvantages. But it is a policy, not a fantasy. Therefore, I argued, it represents a major step forward in Israel's national discourse.

Yemini has done good work exposing the European campaign to delegitimize Israel. He has been outspoken in condemning the New Israel Fund and J Street for their efforts to delegitimize Israel. He has angered his fellow leftists with his warnings that Fatah continues to reject Israel's right to exist. Yet despite all of this, in his remarks, Yemini ignored what I had asserted just moments before and claimed there is no alternative to the two-state solution. The international community, which is waging a political war against Israel, will accept nothing less. Surrender is the only option.

Arieli for his part said that Israel has two options. We can surrender voluntarily or we can be forced to surrender by the international community. If we want to remain part of the Western world, we'd better do it ourselves. The two-state solution, he said, is Israel's only hope.

Arieli assured his audience that Israel has no reason to worry about surrendering defensible borders because everything will work out fine. If we go with option one and voluntarily deny ourselves the means to defend what will remain of our country after we fork Judea, Samaria and Jerusalem over to the Palestinians who reject our right to statehood in what will remain of the country, we will definitely be safe.

During his remarks, Arieli repeatedly argued that his position is the same as opposition leader Tzipi Livni's. And he was correct.

In her interview on Friday with the Post's Editor-in-Chief David Horovitz, Livni also argued that Israel has no option but surrender. Israel will lose all international support, not to mention its Jewish character if we don't give the Palestinians what they want. 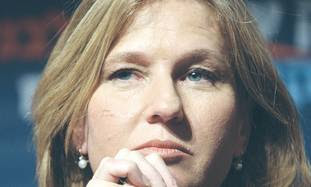 Livni's withering criticism of Prime Minister Binyamin Netanyahu revolves around what she considers his insistence on placing limitations on the scope of Israeli surrenders. Livni admitted that Fatah leader Mahmoud Abbas rejected former prime minister Ehud Olmert's generous offer of a Palestinian state in Jerusalem, most of Judea and Samaria, and Gaza. But she denied that his action means that the Palestinian leader isn't interested in Palestinian statehood.

Ridiculously, Livni claimed that what her own boss offered the Palestinian leader was irrelevant. Livni asserted that as Olmert's foreign minister, she was the only one empowered to make offers in Israel's name. Since she says she made no offer, as far as she is concerned, the fact that Abbas rejected her boss's offer is irrelevant.

Like Yemini and Arieli, Livni sees no option but surrender. And like them, she admits that surrender will not bring peace. As she put it, a surrender deal "would be very fragile," and "it might be accompanied by terrorism."

As she summed things up, if she gets her way and Israel gives up the store, "I have no illusions about a 'New Middle East.' I don't believe that, the moment an agreement is signed, we'll live in a fairy tale world of prosperity and happiness."

But still, as far as she is concerned, this is Israel's only choice.

And it is not only regarding the Palestinians that the Left feels that Israel can do nothing but surrender. The same is true regarding Hizbullah and Syria. In her interview Livni defended her role in producing UN Security Council Resolution 1701 that set the terms for ending the war with Hizbullah in 2006.

Resolution 1701 by most accounts was the single worst failure of Israeli diplomacy in recent memory. It placed Hizbullah - an illegal terrorist army run by Iran - on equal footing with Israel. It empowered the Hizbullah-dominated Lebanese government and army to prevent Hizbullah's rearmament and so paved the way not only for Hizbullah's rearmament, but for Hizbullah's takeover of the Lebanese government and military. Moreover, it enhanced the power of the Hizbullah-appeasing UN forces in south Lebanon.

All of these things made 1701 a strategic disaster for Israel. But Livni refuses to acknowledge this.

In her interview, she defended 1701 by claiming that unlike then prime minister Ehud Barak's withdrawal from southern Lebanon in 2000, 1701 gave Israel legitimacy for striking Hizbullah in the future.

As she put it, "We for the first time created a situation in which that rearmament was not legitimate, with the natural consequent options if we need to use them."

Ironically, that is precisely what Barak claimed he was doing when he pulled out in 2000. In March 2006, just four months before the war which was to see Israel demonized on virtually every diplomatic stage, Haaretz's Ari Shavit claimed that by withdrawing to the internationally recognized border with Lebanon in May 2000, "Barak built the invisible wall of international legitimacy," for future Israeli combat operations in Lebanon.

And since 2006, the international campaign to deny Israel the right to defend itself has only gained ground.

As for Syria, following the Obama administration's lead, today the Israeli Left is revving up its old push to surrender the Golan Heights. The Left contends that Syrian dictator Bashar Assad is keen to abandon his strategic alliance with Iran and that by handing over Israel's defensible border in the north, Israel will convince him to do so and so weaken Iran.

But of course, reality tells an opposite tale. If Israel renders itself defenseless, it will invite war.

Moreover, Assad's growing power owes solely to his alliance with Iran. As Michael Young from Lebanon's Daily Star wrote last week, "Washington wants to engage Syria so that it will give up on alliances that the Syrians will never willingly surrender, because doing so would so weaken Damascus politically that it would defeat the very purpose of engagement."

The Americans wouldn't care about Syria if it were moderate. The US wouldn't be seeking to appease Assad if he didn't allow Hizbullah to use Syria as its logistical base, if he hadn't directed the assassination of former Lebanese prime minister Rafik Hariri or if he wasn't Iran's junior partner in its proxy war against the US in Iraq. If Assad weren't a nuclear proliferator together with Iran, North Korea and Venezuela, he would be treated with the same reproach as Egyptian dictator Hosni Mubarak.

And yet, none of this matters for the Left. In its view, Israel can completely change Syria - and Iran - by denying itself the ability to defend northern Israel.

To support this view, on Friday Haaretz's Aluf Benn wrote that outgoing IDF Chief of General Staff Lt. Gen. Gabi Ashkenazi intends to make a name for himself in politics by championing an Israeli surrender of the Golan. Ashkenazi - who has enjoyed an intimate relationship with the Obama administration - has been the chief opponent of an IDF strike on Iran's nuclear installations. His personal mentor is Maj. Gen. (ret.) Uri Saguy. Saguy has served as the chief champion of a Golan Heights surrender for more than a decade.

Until the peace process spawned the Palestinian jihad and the surrenders of south Lebanon and Gaza brought war, the Left's message was, "Join us and we'll bring peace and prosperity."

That was an optimistic, attractive message and it won the Left a couple of elections. But now that their plans have all failed, the Left's message has become, "Join us because resistance is futile. We are doomed."

This is not an attractive message. Happily, it is also not true.

What is true is that together with the reality of the failure of the Left's delusions, its defeatist message has lost the Left the support of the public.

Netanyahu expresses condolences to Abbas over death of his brother - Ha'aretz