A proposal to build a theme park that would feature a life-size replica of Noah’s Ark has set off a controversy in Kentucky that is worth watching. Within days, the controversy had spread to the pages of The New York Times and USA Today.

So, who’s afraid of Noah’s Ark? Lots of folks, it seems, but the editors of the state’s two largest newspapers in particular. 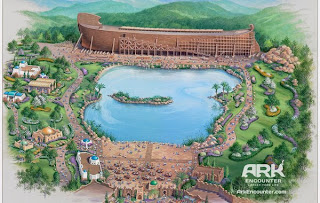 The “Ark Encounter” is a major project to be undertaken by a partnership led by Answers in Genesis, the group that built the Creation Museum in northern Kentucky — an attraction that has now recorded over a million visitors by some reports. The attraction, also to be built in Kentucky, is to include live animals and a 100-ft tower of Babel.

The partnership has applied for incentives under the Kentucky Tourism Development Act, and Governor Steve Beshear announced plans for the park at a news conference in the Kentucky State Capitol.

The Courier-Journal of Louisville editorialized that the project would amount to “creationist tourism” that would embarrass the state by featuring “a fundamentalist view resting on biblical inerrancy [that] indirectly promotes a religious dogma.”

The editors asked, “Why stop with creationism? How about a Flat-Earth Museum? Or one devoted to the notion that the sun revolves around the Earth?”

An op-ed column in the same paper lamented with frustration the fact that the proposed theme park was just another reminder that “only 39 percent of Americans believe in the theory of evolution.”

Meanwhile, the state’s second-largest paper, the Lexington Herald-Leader, declared: “Anyone who wants to believe in a literal interpretation of the Bible has that right.” But, the paper added, the state would be embarrassed by appearing through its governor to embrace “such thinking.”

The paper reported that Daniel Phelps, president of the Kentucky Paleontological Society, called Gov. Beshear’s support of the project “embarrassing for the state.”

The editorial boards of the state’s two largest newspapers seem to be very embarrassed indeed. Gov. Beshear kept his comments fixed on economics: “The people of Kentucky didn’t elect me governor to debate religion,” he said. “They elected me governor to create jobs.”

The proposed theme park is expected to attract 1.6 million visitors in its first year, bringing a $250 million annual economic impact within five years.

The most interesting aspect of this controversy isn’t the proposed theme park, but the panic among the commonwealth’s self-appointed guardians of evolutionary theory.

So who’s afraid of Noah’s Ark? Now, we know.

Can/Should we interpret the Bible as literal? - GotQuestions.org