Pieces of U.S. State Department diplomatic correspondence have been referring to the Hezbollah terrorist organization as a "resistance" group, according to cables released by WikiLeaks and reviewed by WND.

Outside of al-Qaida, the Iranian-backed Hezbollah has the distinction of having killed the most Americans in terror attacks. It is also responsible for scores of terrorist actions targeting Israelis, including rocket launchings against civilian population centers. Hezbollah's attacks against the Israeli north in 2006 killed 43 Israeli civilians and wounded more than 4,000.

And the State Department officially designates Hezbollah as a terrorist organization.

Still, a State Department cable from the U.S. embassy in Damascus referred to Hezbollah's "armed resistance" against the Jewish state.

"U.S.-Syrian discussions on Hezbollah have tended to 'agree to disagree' after hitting the wall of conflicting views on the legitimacy of armed resistance and Israeli occupation."

The cable and others from around the same time period went on to detail a series of complaints the State Department filed with the Syrian government over its continued arming of Hezbollah to the point the Iranian-backed group is thought to have more than 40,000 rockets and missiles pointed at Israel.

One cable related Hezbollah's estimated capability to sustain rocket attacks on Tel Aviv and Israel's north, which would represent a "quantum leap" over the damage Hezbollah caused to Israel during the 2006 war. 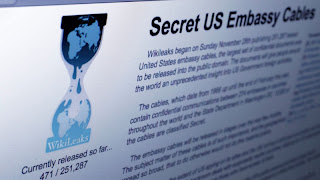 Another cable reported the U.S. was working with Arab countries to help stem the flow of weapons to Hezbollah and Hamas.

And still another cable related Syria's foreign minister, Faysel Meqdad, was so upset with U.S. complaints of his country arming Hezbollah that he accused the American government of doing Israel's bidding.

The State Department correspondence is not the first time government officials referred to Hezbollah as a "resistance" organization.

WND has reported multiple times how Condoleezza Rice, when she was secretary of state, publicly called both Hamas and Hezbollah "resistance" movements.

WND also reported in a May 2008 interview with the New York Times, Obama stated both Hamas and Hezbollah have "legitimate claims" that are being "weakened" by the violence the terror groups carry out.

In a July 2008 article in The Annals, a publication of the American Academy of Political and Social Sciences, Brennan argued it "would not be foolhardy, however, for the United States to tolerate, and even to encourage, greater assimilation of Hezbollah into Lebanon's political system, a process that is subject to Iranian influence."

Also, at a press conference in August at the Center for Strategic and International Studies in Washington, Brennan declared, "Hezbollah started out as purely a terrorist organization back in the early '80s and has evolved significantly over time. And now it has members of parliament, in the cabinet; there are lawyers, doctors, others who are part of the Hezbollah organization."

Maintenance of a civilian unit of doctors and lawyers by terrorist groups is not uncommon in the Middle East. Hamas has long brandished a civilian wing that provides medical care and education to the Palestinian population. According to Israeli security officials, Hezbollah and Hamas emphasize this outreach to endear their terror groups to the local population.

Brennan went on to state, "Quite frankly, I'm pleased to see that a lot of Hezbollah individuals are in fact renouncing that type of terrorism and violence and are trying to participate in the political process [in Lebanon] in a very legitimate fashion."

Hezbollah in 1983 carried out a massive attack on the American Marines barracks inside Lebanon in which suicide bombers detonated truck bombs, killing 241 American servicemen, representing the highest single-day death toll for the Marines since the Battle of Iwo Jima of World War II.

US has failed to curb Damascus' interference in Lebanon - Daily Star