Rep. Michele Bachmann (R.-Minn.) is calling on the U.S. House of Representatives to de-fund Planned Parenthood after the newly elected Republican majority takes charge next month.

“Well, I think one thing that we can do, quite simply, is to withhold funding from Planned Parenthood,” Bachmann said when asked by CNSNews.com what practical steps she believed the in-coming House majority could take to protect unborn babies.

“It wouldn’t mean that Planned Parenthood would go out of existence, because they do have their own independent funding, but what it would mean is that the taxpayer would no longer be funding that,” said Bachmann.

A Government Accountability Office report released in May indicated Planned Parenthood received $657.1 million in federal taxpayer funding (as opposed to state and local taxpayer funding) in the seven years from 2002 to 2008.

Bachmann also said the fact that the health-care reform law signed by President Barack Obama in March provides tax dollars for abortions is one reason Obamacare should be “completely defunded.” 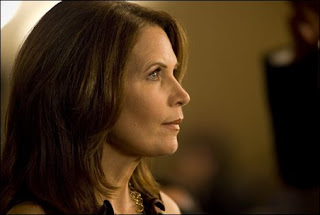 “For the first time in American history under Obamacare - socialized medicine - under President Obama, we have federal funding of abortion,” said Bachmann. “President Obama denies that, but we know that it’s already happened in the state of Pennsylvania. And so, therefore, it’s imperative that we in the House completely defund Obamacare so that we no longer force Americans to violate their moral conscience and pay for other people’s abortions.”

As reported by CNSNews.com in July, the federal government has given the state of Pennsylvania $160 million to set up a high-risk insurance pool that will pay for insurance that covers any abortion legal in the state. This funding contradicted President Obama’s claim at the time he signed the health-care law that an executive order he was issuing would prevent funds disbursed under the bill from paying for abortions.

Bachmann also called for defunding the United Nations Population Fund (UNFPA), which has programs in China, where, according to the State Department, the government enforces its one-child-per-couple policy with coercive abortions and sterilizations.

In the six years before President Obama took office, the U.S. government did not fund the UNFPA because of its involvement in China’s coercive population-control program. Soon after his inauguration in 2009, Obama moved to restore funding to UNFPA. As it now stands, UNFPA receives U.S. tax dollars but the money is supposed to be reduced by the amount the UNFPA uses on its programs in China. Since money is fungible, any U.S. tax dollars the UNFPA receives will involve U.S. taxpayers in helping to fund China’s coercive family planning program so long as UNFPA remains involved in that program.

“The U.S. government suspended funding for the United Nations Population Fund (UNFPA) from 2002 through 2008 because of the UNFPA's programs in China, where the State Department determined that coercive family planning practices had occurred,” explained a Congressional Research Service report published in June 2009. “In February 2009, the Obama Administration announced that it would restore U.S. funding for the UNFPA. The Omnibus Appropriations Act, FY2009 (P.L. 111-8), allocated $50 million for the Population Fund. However, none of these funds may be used for a country program in China.”

Bachmann told CNSNews.com the money for the UNFPA should be zeroed out of next year’s spending bills.

Bachmann also said that given the dire fiscal situation the United States is facing, with massive annual deficits and entitlement programs facing insolvency, Congress ought to be able to at least start the nation headed back toward fiscal responsibility by de-funding programs that violate the right to life guaranteed in the Declaration of Independence.

“I think it is incumbent upon us as the members of Congress to let people know - not for the purpose of scaring them - but to let people know the stark fiscal realities that we’re facing right now as a nation,” said Bachmann. “And can’t we at minimum start with defunding things like Planned Parenthood and paying for other’s people abortions that are highly controversial and are violating our principles of the Declaration of Independence, our inalienable right to life. That we can at least agree on, that we should defund that.”

Bachmann is a co-sponsor of a bill proposed by Rep. Mike Pence (R.-Ind.) — “The Title X Abortion Provider Prohibition Act” — that would deny federal family planning funds to any organization “unless the entity certifies that, during the period of such assistance, the entity will not perform, and will not provide any funds to any other entity that performs, an abortion” except in cases where the unborn child to be aborted was conceived by rape or incest or is a threat to the life of the mother.