This just in: Islam is a religion of peace. So said Barack Obama yet again on Sunday in India. Even though he was repeating conventional boilerplate that he has repeated many times in the past, and that the Bush Administration repeated before him, his statements in Mumbai signaled his determination to keep the United States firmly committed to the policy errors that flow from this mistaken assumption.

Obama was visiting St. Xavier’s College in Mumbai, just a short walk away from the Chhatrapati Shivaji Terminus, one of the sites of the November 26, 2008 jihad attacks in which Islamic supremacists murdered 173 people and wounded another 308. Given the setting, it was not surprising that a student at St. Xavier’s asked Obama this question: “What is your take or opinion about jihad? Or jihadi, whatever is your opinion, what do you think of them?” 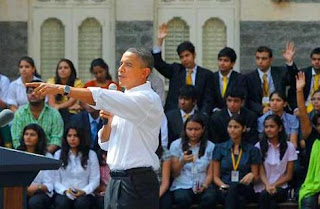 Obama initially seemed taken aback, fumbling for an answer: “Well…” Pause. “You know, uh…” Pause. Then he fell back on some clichés from back in Great World Religions class: “The phrase Jihad has lots of meanings within Islam, and is subject to a lot of different interpretations. But I will say that first, Islam is one of the world’s great religions.” Having begun mining the boilerplate, he finally hit something resembling a stride:

“And, uh, more than a billion people who practice Islam, the overwhelming majority, uh, view their obligations to their religion as ones that reaffirm peace and justice, and fairness and tolerance. I think all of us recognize that this great religion in the hands of a few extremists has been distorted to justify violence against innocent people that is never justified.”

There was no surprise in any of that. Obama invokes the great unicorn in which we all must believe (on pain of charges of “bigotry” and “Islamophobia”) but which no one has ever actually seen: a moderate, mainstream and traditional form of Islam that does not teach warfare against and the subjugation of unbelievers. The peacefulness of individual Muslims does not establish the existence of this peaceful form of Islam, although many believe that it does, because when these peaceful Muslims are challenged on Islamic grounds by jihadists and Islamic supremacists, they are vulnerable: jihadists get recruits and justify their actions among Muslims by appealing to Islamic teachings and presenting themselves as the authentic Muslims. Peaceful Muslims must challenge that if — if — they really wish to lessen the influence jihadists have within Islamic communities.

But one thing is certain: none of that is going to happen. Obama’s commitment to the idea that Islam is a religion of peace that has been distorted by a few extremists is rock-solid and unshakable, and so it is important to note some of the policy errors that flow from it and will continue to do so: Unfortunately, such repair work is not easily done – as even an Islamophile like Obama has discovered. In response to this “distortion” of Islam, Obama recommended that the distorters be “isolated”:

“And so I think one of the challenges that we face is how do we, uh, isolate those who have these distorted notions of, uh, religious war, and reaffirm those who see faiths of all sorts, whether you are a Hindu, or a Muslim, or a Christian, or a Jew, or, uh, any other religion, or you don’t practice a religion. And we can all treat each other with respect and mutual dignity, and that some of the universal principles that Gandhi referred to, uh, that those are what we’re living up to, as we, uh, live in a nation, uh, or nations, that have very diverse religious beliefs.”

Yet as Obama has tried to “isolate” these “extremists,” he has earned the ire of other Muslims who are sympathetic to them. Some of them demonstrated against him in Indonesia a few days ago, on the grounds that his foreign policy was not sufficiently different from that of George W. Bush. The president may be forgiven if he was surprised by the vehement reaction against him from members of a group he has worked so hard to court. He may have assumed that if he showed good will and willingness to compromise and make concessions, his gestures would receive a like response from Islamic leaders. And why shouldn’t he have assumed such a thing? After all, it’s a religion of peace!

We Need to Talk About Islam - Wall Street Journal