The San Francisco Giants won the 2010 World Series Monday, November 1. It was the first time the team has won the Series since 1954, when the franchise was playing as the New York Giants in the Polo Grounds. It should have been a reason for happiness, right? – At least, if you were a Giants fan, and weren’t a Texas Rangers fan. Certainly, it should have been a time of celebratory jubilation on the streets of San Francisco, one would think.

The victory was acknowledged by many, with self-congratulations all around. However, the dark side of humanity showed up – as it always seems to do — in demonstration of the malevolent side of humankind.

As fans packed the streets, there were some violent incidents reported such as fires, several fistfights and a mob attack on a vehicle that was driven into a crowd.

KTVU.com posted stunning helicopter footage of a large fire that was started at the intersection of Mission and 22nd streets followed by a driver's attempt to steer into the crowd. The car was stopped, its windshields were smashed and passengers were attacked. Riot police arrived soon after the melee and the crowd began to thin out. (http://mlb.fanhouse.com/2010/11/02/san-francisco-riots-follow-giants-world-series-victory/?synd=1 )

The rioting is, of course, not without precedent. We have witnessed it time after time in large cities whose sports teams have won world championships. We have only to recall Chicago during the time when Michael Jordan ruled the NBA courts with the Chicago Bulls, and the victories of the L.A. Lakers and the rioting aftermath in some areas of Los Angeles. One can but look in open-mouthed wonder upon such obstreperous behavior – all in the name of celebrating something that’s supposed to be fun, and “good.”

The founding fathers of this nation wrote the Declaration of Independence and the Constitution with almost consensus acknowledgement that man’s nature is depraved – fallen from the time of Eden. Peoples around the world have consistently validated that view of the human condition by often exhibiting unseemly comportment. Except in the most tyrannical and oppressive of regimes, people often become unruly if things push them to the limits. Even such fear as those governments can present sometimes can’t assuage the masses. 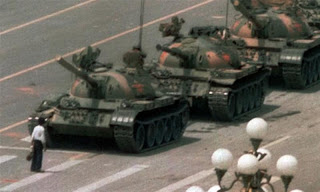 People will face down tanks and machine guns in some extreme cases, as was witnessed by the Tiananmen Square uprising during the Olympic Games held in China some decades ago. Those Chinese faced down the murderous red military in a righteous cause of seeking liberty by demonstrating through the cameras of the world how brutal were their masters.

So, it is not against these courageous sorts that I write for our purposes here. There is a time for protests – for righteous uprisings. I put much of the civil rights protests of Martin Luther King Jr.’s day in that category to some extent. Although some of it was for the sake of crass political power grabs among certain of the day’s left-wing politicians and community organizers, much of the demonstrations and actions taken were necessary to break the oppressive grip of racial bigotry.

Those who riot simply because they are riotous – unbridled in their "if it feels good do it" hedonism — fit, in my view of things, into the category that is the subject of this commentary. They are of the classification I believe the apostle Paul was writing about, as recorded in his second letter to Timothy:

“This know also, that in the last days perilous times shall come. For men shall be…incontinent, fierce” (2 Tim. 3:1-3).

Out of sheer, uncontrolled determination to smash their way through life, no matter what they break or who they hurt, those who live riotously prove the founding fathers right. The depravity of man is front-and-center for all to witness. It is an end-times signal that is manifest time after time in this generation.

That brings us to the purpose of our constitution, our laws. No individual or class of individuals has the right to trample on the property or person of others. It is codified; it was put there by Washington, Jefferson, Adams, Franklin, and all the rest. They got these precepts from the Word of God - the Bible.

We have recently watched the riots in Greece, Spain, and other places where populaces, being weaned off the spigots of socialistic largess, have acted as riotously as the mobs that burn down parts of their cities because their teams won. Governments are no longer capable of taxing the income-producing, working people of those nations enough to pay for the welfare and various other social programs politicians voted in time after time in order to gather votes to themselves.

Governments, hopefully, have enough funds to defend against violence in the streets. One American city is so doing, it seems.

INDIANAPOLIS - Armed security guards will be on hand at 36 unemployment offices around Indiana in what state officials said is a step to improve safety and make branch security more consistent… [Marc Lotter, Department of Workforce Development spokesman] said the agency is merely being cautious with the approach of an early-December deadline when thousands of Indiana residents could see their unemployment benefits end after exhausting the maximum 99 weeks provided through multiple federal extension periods.

"Given the upcoming expiration of the federal extensions and the increased stress on some of the unemployed, we thought added security would provide an extra level of protection for our employees and clients," he said. ("Unemployment Offices to Add Armed Guards," Indiana News Story, WRTV, Nov. 2, 2010)

Let’s pray that economic conditions in America don’t become so desperate that they eventuate in violence like that seen in other countries. However, the fierce nature of fallen man hasn’t stopped raising its hideous head since the time that the first man rebelled and determined to do what was right in his own eyes, rather than what God chose for him. The ferocity is prophetically scheduled to get infinitely worse, when the Holy Spirit withdraws from governing the consciences of mankind in the way He does at present:

“For the mystery of iniquity doth already work: only he who now letteth will let, until he be taken out of the way” (2 Thess. 2:7).

The Restrainer – the Holy Spirit — will be removed as governor of the unbridled evil of mankind when the Rapture takes place. God will allow the “mystery of iniquity” to strongly influence all who will not come to Christ for salvation during the last seven years of human history leading up to Christ’s Second Advent (Rev. 19:11). The foreshadows of that Luciferian evil are darkening our daily lives as never before. Each person who names the name of Christ must shine truth from God’s Word in order to illuminate the pathway to Jesus in these closing days of the age.

Who/What is the restrainer in 2 Thessalonians 2:6? - GotQuestions.org