No Pass from Theological Responsibility — The BioLogos Conundrum

Public debate is unpredictable by nature, but I have to admit that the approach undertaken by the folks at BioLogos continues to amaze me. The BioLogos movement is a straight-forward attempt to persuade evangelical Christians to embrace some form of evolutionary theory. Organized by a group that includes Dr. Francis Collins, now the Director of the National Institutes of Health, the movement seeks to marginalize objections to evolution among conservative Christians. It offers a very sophisticated Web site and an energetic communications strategy.

Furthermore, they have been breathtakingly honest about the theological implications of their arguments. Writers for BioLogos have repeatedly made the case that we must relinquish the inerrancy of the Bible and accept that the biblical writers worked from a defective understanding of the world and its origins. They have asserted, for example, that the Apostle Paul was simply wrong in assuming that Adam was an historical person from whom all humans are descended. They have been bold and honest in rejecting the biblical account of the Fall as historical. They have warned that an affirmation of biblical inerrancy has led evangelicalism into an “intellectual cul-de-sac.” A complete inventory of the doctrinal concessions they will demand is not yet in sight, but as I have affirmed before, they deserve credit for the honesty of their proposals.

They are also clear about their motive. In their view, the acceptance of evolution is necessary for evangelism. They are motivated, they insist, by a concern that a rejection of evolution puts Christians in a position of intellectual embarrassment. The rejection of evolution places Christians outside the intellectual pale, they assert, leading to the discrediting of the Gospel. They believe that intellectuals, especially scientists, will not respect an evangelistic witness to the Gospel from one who is intellectually discredited by rejecting evolution. They are embarrassed by the fact that a majority of evangelicals reject evolution, and they honestly believe that some people will not come to know Christ because they are so offended by our unwillingness to accept evolution. They have repeatedly asserted that the credibility and integrity of our Christian witness is at stake.

The writers for BioLogos have been unsparing in their criticism of evangelicals who believe in the inerrancy of the Bible, or are proponents of either Intelligent Design or creationism. They initiated a public debate by presenting their arguments in the public square. But now, it appears, they really do not want a public debate at all. They want a one-way conversation.

On November 8, an article appeared at the BioLogos site that was explicitly addressed to me. The author, Mark Sprinkle, had courteously informed me by e-mail on November 7 that the article would appear the next day. And so it did. 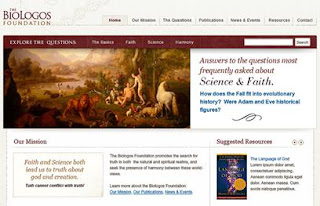 In his article, Dr. Sprinkle uses the account of Peter and Cornelius from Acts 10 to argue that “our theology is descriptive, not prescriptive; it is our collective and halting attempt to describe in coherent terms what we know of God by what we have seen of His acts and what we have read in His Word — and, above all else, by what we have seen in the acts of the Word, Jesus.” That argument points very clearly in the direction of minimizing theology and doctrine, but it is also false. Unless a church forfeits all doctrinal responsibility, at least some theology is always prescriptive.

But theology, he argues, “is put to the test not just by our logic, but by the witness of what God is doing in our lives and in the lives of others around the world.” He then states this:

“Evidence of the Spirit at work is the only true measure we have of our theology; all other measures, including whether it fits our carefully-reasoned arguments of who is in and who is out, are vanity.”

That is an interesting statement, but it is nonsensical unless there is some means of evaluating what is and is not authentic evidence of the Spirit at work. And that, of course, would mean some kind of biblical and theological test. The effort to escape theology gets us nowhere.

Dr. Sprinkle then turns to me specifically, charging that I regard those involved with BioLogos to be “confused Christians” at best. He claims that my criticism of the arguments made by figures associated with BioLogos amount to my effort to limit “God’s ability to redeem and transform whomever He so pleases, in whatever manner He so pleases.” I would greatly appreciate any reference to where I have ever addressed such an issue with reference to BioLogos. There is none. At the same time, Dr. Sprinkle’s unavoidable implication is that God’s Spirit moves in ways contrary to God’s Word — and that I do flatly and energetically reject.

Dr. Sprinkle writes with concern about “Dr. Mohler’s repeated implications and suggestions, if not outright pronouncements, that I and anyone else who does not reject evolutionary processes are, therefore, not Christian in any but a nominal or diminished way, not authentic followers of Jesus no matter what we say and despite the evidence of the Holy Spirit both in us and working through us.”

At this point, given the public nature of this statement, I have to ask the only question I know to ask. Can these people read? I defy anyone to locate a single sentence where I have ever questioned the salvation of anyone in any context where I have addressed anything related to BioLogos. I have never questioned their salvation, nor have I attempted to interrogate their hearts. I accept at face value that their ambitions and intentions in their own minds are worthy. I cannot read their souls.

I can read their words, however. Their theological arguments are published in the public arena. They are not shy about making their proposals and they call for a radical reformulation of evangelical doctrine. Their assaults upon biblical inerrancy have not been made in private conversations, but in public discourse. Their argument that the Apostle Paul was wrong to believe in an historical Adam and a historical Fall was made in public, as was their denial of common descent through Adam.

They will have to take responsibility for these arguments. They should expect no less than a spirited debate over their proposals, and it is nothing short of bewildering that they now ask, in effect, for a pass from all theological scrutiny. They accuse conservative evangelicals of driving evangelicalism into an “intellectual cul-de-sac” and the status of an intellectual “cult,” and then have the audacity to complain of the “tone” of those who argue that their proposals amount to a theological disaster.

Virtually every form of theological liberalism arises from an attempt to rescue Christian theology from what is perceived to be an intellectual embarrassment - whether the virgin conception of Christ, the historicity of the miracles recorded in the Bible, or, in our immediate context, the inerrancy of Scripture and the Bible’s account of creation.

BioLogos is a movement that asserts theological arguments in the public square in order to convince evangelical Christians to accept their proposals. They now have the audacity to ask for a pass from theological responsibility. That is the one thing they may not have.

The Earth's Chronology - Grace to You (John MacArthur)

How the Bible and Evolution Conflict - Faith Facts