The outcome of the mid-term elections will put the brakes on President Obama’s radical domestic agenda, forcing him to redefine his presidency to remain viable for 2012. Expect him to remake his presidency using foreign affairs and national security powers. Keeping the President’s strategic tactics in mind, congressional Republicans had better identify their own priorities now and watch for abuse.

The new Congress should reverse what Obama and his Democratic congressional majority rammed through, including the historic healthcare overhaul and out-of-control spending programs. But they must not become so distracted as to miss the President’s new focus.

Obama is left with two alternatives to remake himself. He can move to the political middle to compromise with the Republicans — an unlikely maneuver — or he can redefine himself using his constitutional foreign affairs and national security powers.

We should hope that his presumed redefinition as a foreign affairs and national security leader will bring an improvement over his past performances in these areas. Consider some highlights from Obama’s poor record and then what the new Congress must do.

Obama didn’t get us into Iraq, but he took credit for staying on President Bush’s timeline to pull combat troops out this August. Now he deserves some credit for the current precarious situation that will likely result in an unstable government that is friendly with Iran.

Obama’s Iran policy is a disaster. He started with symbolic gestures, followed by empty threats and then sanctions. Tehran continues its atomic weapons program, interferes in Iraq and Afghanistan, and uses its Revolutionary Guards Corps and terrorist proxies like Hezbollah to keep the Middle East on edge.

The administration’s North Korea policy is tethered to the Six-Party process aimed at denuclearization of the rogue nation. But the policy hasn’t produced any helpful results. Last year, Pyongyang tested another atomic device, and there are reports of yet another in the works. The regime continues to send weapons of mass destruction to Iran, Syria, and Pakistan, and it persists in pursuing hostile actions, such as sinking a South Korean warship last March.

Candidate Obama promised to resolve the Israel-Palestine crisis by creating “two-states for two peoples” in his first term. He has made some fine speeches on the issue, but aside from preliminary talks, there has been no progress, nor is there any in sight.

Afghanistan is Obama’s “war of necessity,” and he will host an Afghan war strategy review this December. By most accounts the war is going badly, our Pakistani partner isn’t much help, our allies are leaving, and public opinion is plummeting. He is expected to finesse the beginning of our exit next summer by putting a happy face on turning that country back to the Taliban, our new negotiating partner and long-time enemy.

China is a major problem for Obama. Beijing is a rising superpower with the world’s second-largest economy, an expanding and sophisticated military, and an aggressive foreign policy. Obama’s China policy denies that we are in a long-term cold war with the Asian giant, even though military confrontations on the high seas and combative trade and currency problems persist. 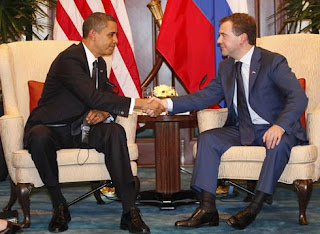 Obama touts our “reset” relationship with Russia. He struck an arms-control deal with Moscow earlier this year, which on the surface is good news, but the fine print reveals that the U.S. must stop producing new missiles and warheads while Russia continues to produce them. Also, we must not forget Moscow’s 2008 Georgia war and Russia’s manipulation of natural gas deliveries to intimidate former satellite nations like the Ukraine and Western European customers. And because of Russians’ so-called cooperation, Obama abandoned our European-based missile defense system.

Islamist terrorism is on the rise, yet Obama naively expunged all references to Islam, Muslim, and jihad from our security strategies. Since he took office, that threat has morphed into new regions to threaten America, shown by examples such as the explosive packages sent from Yemen last week to Jewish religious sites in the U.S. and the Yemen-trained Nigerian underwear bomber last Christmas.

Last month Obama’s FBI director and Homeland Security Secretary warned Congress that homegrown Islamic terrorism is a growing problem, as evidenced by incidents at Fort Hood, Times Square, and more recently with the arrest of the Washington Metro bombing jihadist. Apparently Islamists don’t welcome Obama’s outreached hand of friendship or accept his apologies for alleged past American offenses delivered to Muslim audiences, such as his June 2009 speech at Cairo University.

Even Obama’s immigration policies are dangerous. His administration promises to protect “the integrity of our borders,” but he targets Arizona citizens and state law enforcement officers for defending themselves from heavily armed Mexican drug gangs and from anyone else who may be flooding across our southern border, unhindered and unintimidated.

We must not ignore Obama’s confusing Pentagon record. Secretary of Defense Robert Gates is culling the defense budget for waste, which is appropriate, but he focuses Obama’s strategy on counterterrorism while rising conventional foes like China get short shrift. Then Obama uses his bully pulpit in his 2010 State of the Union address to make repealing the homosexual-exclusion policy a top Pentagon priority.

This is an ugly record and a difficult starting point from which to redefine his presidency. But, of course, we want our President to succeed when our security is at risk.

That’s why the new Republican congressional leaders need to identify their priorities and to be prepared to work with the President. But they must be ready to play hardball with a President who is redefining himself for political reasons rather than just seeking the good of the nation.

McConnell: Obama must 'move in our direction' - The Washington Times