Demonstrators standing outside the former United States Embassy in Tehran shouted, "Down With America" in a well scripted event to mark the 31st anniversary of the 1979 storming of the site which began a 444 day hostage crisis and severed Washington's ties with Iran. Iranian websites posted statements applauding the brave takeover of the US embassy to protest American support for the then pro-Western Shah of Iran who had been toppled by the Islamic Revolution months before the US embassy takeover.

Outside the former embassy crowds, including many schoolchildren bussed to the event, chanted anti-American slogans and taunted effigies of Uncle Sam and US President Barack Obama. 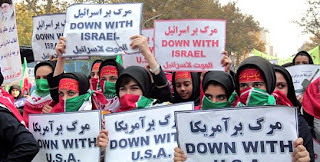 The 31st anniversary of the Iranian takeover of the US embassy in Tehran is a reminder that Bible prophecy will be fulfilled.

31 years ago in the Fall of 1979 a group of young Islamic militants in Tehran, Iran rushed the United States embassy, took 52 people hostage, and for 440 days held the embassy directed by the late Ayatollah Khomeini, the father of the Iranian Islamic Revolution. Among those young Islamic militants was one of the leaders named Mahmoud Ahmadinejad, the current president of the Islamic Republic of Iran. The anti-American, anti-Israel sentiment of the Iranian people has been fueled by Iran's President Ahmadinejad who has called for the total destruction of the Jewish state of Israel.

This 31 year political scenario is actually a precursor to the fulfillment of a prophetic scenario that can be found in Bible prophecy. The ancient Jewish prophet Ezekiel wrote 2500 years ago that Iran - referred to as Persia in Ezekiel 38:5 - would be one of the main players on the world stage in the times of the end. Ezekiel also wrote of a coalition of Middle East nations that would align themselves against the Jewish state and move to destroy Israel (Ezekiel 38:2-6).

As Iran celebrates the 31st anniversary of the US embassy takeover in Tehran by these Islamic militants, the stage is set for Bible prophecy to be fulfilled.

Psalm 83 or Ezekiel 38 - Which is the Next Middle East News Headline? - BPB (Bill Salus)