Netanyahu: Palestinians Have Made Us Cynical About Peace Process

In an address to Israel’s Knesset on Wednesday, Prime Minister Benjamin Netanyahu said that Palestinian behavior was making Israelis cynical about the prospects of peace, and urged his fellow lawmakers to wake up to the fact that Israel simply does not have a viable peace partner.

Netanyahu was forced to appear before the Knesset after 40 opposition and left-wing coalition lawmakers signed a petition demanding he answer for his government’s peace process policies.

The opposition Kadima Party is trying to paint Netanyahu as the reason for the breakdown of the most recent direct Israeli-Palestinian peace negotiations.

Netanyahu said that while he and his government had entered the talks with a genuine desire to see progress, the Palestinian Authority had not, noting as an example the ongoing incitement against Israel in the official Palestinian media even as the talks were taking place. 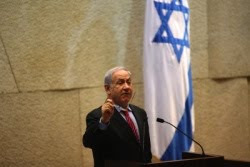 The arguments presented repeatedly in Palestinian media are not “about borders or certain settlements, but rather the negation of the State of Israel’s right to exist in any borders. This is not expressed in one single article or unusual statement, but all the time,” said Netanyahu. “To say the least, this does not advance reconciliation between peoples or increase our desire for a peace agreement.”

Netanyahu continued by reiterating his position that without reciprocity, there is no chance for peace.

“Anyone with any common sense can see that this process demands fairness and telling the truth. It did not fail because there was a lack of activity by the Israeli government.”

Netanyahu explained that the Palestinians are still employing a strategy whereby they paint Israel as the obstacle to peace, and then sit back and wait for the international community to squeeze concessions out of the Jewish state. Meanwhile, the Palestinians give nothing in return.

Eventually, playing along with this will bleed Israel dry, the prime minister warned.

“If one has to pay endless costs just for the luxury of having a process, it is like a man standing on a street corner…[who] gives 100 shekels to the first person passing by, and to the second and the third. Everyone will crowd around you and everyone will come to you and pat you on the back and tell you you’re a heck of a guy. But soon enough, you’ll be in a situation where you’ll be bankrupt.”

Rather than be frivolous with Israel’s inheritance, Netanyahu said it was time to face the truth.