The Chinese military is feeling its strength these days, and its younger generation doesn't necessarily view the United States as a friend. Taiwan, the Dalai Lama, and disputes over the waters off of Southeast Asia have produced a variety of tensions between America and its biggest trading partner. Defense Secretary Robert M. Gates and his Chinese counterpart, Liang Guanglie, met together in Vietnam on Monday, reopening talks suspended since January, making a step toward preventing "mistrust, miscalculations and mistakes."

The United States' plans to sell Taiwan $6.7 billion in arms caused China to break off defense relations with the US at the beginning of the year, and those connections are just now getting taped back together. On Monday, the United States' and China's defense ministers met together at the sidelines of the Association of Southeast Asian Nations (ASEAN) summit in Hanoi, Vietnam, to keep things peaceable. The United States has been approving arms sales to Taiwan for decades under the Taiwan Relations Act (TRA), which has governed arms sales to Taiwan since 1979. These sales consistently irritate China, which still considers Taiwan its territory even though the island has governed itself for 61 years. 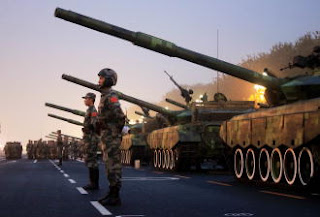 China's military has grown in strength and capability in recent years. It has long admired the United States' military might, but also holds a suspicious fear of America's intentions toward China. Last week, China took part in its first war games with the Australian Navy – exercises China was not willing to invite the US to join. The US would not be welcome to such useful engagements, China's Commander Cao said in refracted English, until, "the United States stops selling the weapons to Taiwan and stopping spying us with the air or the surface."

While older officers might still regard the United States with general goodwill, the younger generation has been brought up to distrust America. "All militaries need a straw man, a perceived enemy, for solidarity," said Huang Jing, a scholar of China's military and leadership at the National University of Singapore. "And as a young officer or soldier, you always take the strongest of straw men to maximize the effect. Chinese military men, from the soldiers and platoon captains all the way up to the army commanders, were always taught that America would be their enemy."

David Shambaugh, an expert on the Chinese military at George Washington University, noted the People's Liberation Army is currently in a self-propagating circle of animosity with the United States, saying, "Unfortunately, the two militaries are locked in a classic security dilemma, whereby each side's supposedly defensive measures are taken as aggressive action by the other, triggering similar countermeasures in an inexorable cycle," he wrote. "This is very dangerous, and unnecessary."

Both China and the US have assured the other that their intentions are peaceful and their exercises merely defensive in nature, but the tensions are not dissolved easily.

The US and China are meeting in Hawaii this week for their annual maritime-security talks. There is concern that China has become increasingly assertive toward Vietnam and other countries in the region. Vietnam accused China a year ago of detaining and beating Vietnamese fisherman seeking shelter from a typhoon in a disputed area of the South China Sea. The incident has led to closer relations between the US and Vietnam.

Pentagon press secretary Geoff Morrell notes that the US's goals in Southeast Asia can include friendship with several nations.

"We can have, hopefully, improved bilateral relations with the Chinese while, at the same time, both of us [are] engaging multilaterally effectively in the region," Mr. Morrell said. "They can enhance one another. They don't have to detract from each other."

We hope so. As China's military power grows and it stretches its limbs, we do not want to get kicked in the shins - accidentally or not.

Strategic Trends: The Rise Of The Far East - Koinonia House