Iranian President Mahmoud Ahmadinejad triumphantly arrived in Lebanon Wednesday morning and immediately met expectations, saying he feels “at home” in the country and vows to continue to fight the “Zionist enemy” and its supporters.

The media highlight of his visit will come on Thursday, when he plans to speak at Bint Jbil, the village near Israel’s northern border where a fierce battle was fought during the Second Lebanon War in 2006.

Ahmadinejad has backed down from his bravado that he would throw stones at the border, but if he changes his mind and does so, “He cannot be allowed to return home alive,” said National Union Knesset Member Aryeh Eldad. 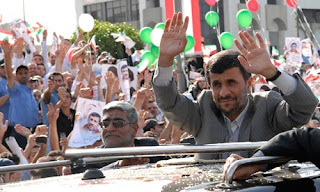 Hizbullah-backed Shi’ite Muslims in Lebanon gave Ahmadinejad a hero’s welcome, signaling increasing Iranian influence over Beirut. However, hours before Ahmadinejad left Iran, Saudi Arabian King Abdullah called him in a rare telephone conversation. Details were not revealed, but Saudi Arabia is highly concerned over Iran’s interference in the stalemated Iraqi government as well as in Lebanon.

Ahmadinejad thoroughly enjoyed the reception from thousands of supporters, who tossed rice and flowers at his heavily armored motorcade from the airport in Beirut to the residence of Lebanese President Michel Sleiman.

TIME magazine noted Wednesday, “Weakened leadership in Washington and in Tehran, and scores of potential flashpoints stretching from Kabul to Jerusalem, have created a dangerous, unstable moment in the Middle East. Ahmadinejad may have backed down from throwing stones, perhaps in deference to Hizbullah’s delicate position, but his trip is a signal that Iran won’t be backing down from its confrontation with the U.S. - a confrontation that may yet play out once again on Lebanese soil.”

Israel and the United States are deeply worried over the new Syrian-Iranian-Hizbullah-Hamas axis, which also has attracted Turkey, once considered a friend of Israel. U.S. State Department spokesman P.J. Crowley said last week that Iran is trying to undermine Lebanese sovereignty by aiding Hizbullah.

The visit is timely for Hizbullah, which is the subject of a United Nations investigation into the assassination of former anti-Syrian Prime Minister Rafik Hariri several years ago. Hizbullah is a minority member of the Lebanese coalition government but holds a grip on legislation through its veto power in the national cabinet.

Hizbullah, which is financed by Iran, has gained wide support in southern Lebanon, where it created a state within a state following the hasty departure of Israeli troops in 2000, ordered by then-Prime Minister and current Defense Minister Ehud Barak.

Six years later, Hizbullah built a stockpile of 20,000 missiles and constructed a maze of underground bunkers across from the Israeli border, enabling it to inflict heavy damage and casualties on Israel in the 34-day Second Lebanon War.

“He stood by us during Lebanon’s troubles, and the 2006 aggression. It’s not much to stand here to welcome him — even if we had to stand for two whole days,” 50-year-old Mahmoud Darwish told Reuters as he waited with his son to welcome Ahmadinejad. “He helped us rebuild Lebanon. If he hadn’t, our houses would still be destroyed and we would still be living in tents.”

Since the war ended with a ceasefire, negotiated by then-foreign minister MK Tzippy Livni (head of today’s opposition Kadima party), that has failed in its stated aim of demilitarizing foreign armies in Lebanon, Hizbullah has amassed tens of thousands of missiles, many with a longer range and which can strike central and southern Israel.