With Voter Fraud Rampant, Look for Upsets on November 2

Back in the early 1990's, I was the first businessman to be brought into a company of engineers. This owner, who gave me a percentage of his company to help him bring it forward, had an idea - the use of smart cards to encrypt and store data securely. He had invented a smart card reader and integrated encryption technology with the smart card. I helped identify the internet as one of the main uses for this technology and it wasn't long before high level security agencies as well as large Fortune 100 companies were using the technology to protect their computer data from internet hackers and espionage. Smart cards are a great way to identify a person, authenticate him, and provide secure access to data.

The only problem with using smart cards is that the programmers or the people in charge of administering how the smart cards are used must be trustworthy. In the technology business, one might refer to this as a single point of failure. And the single point of failure in voting machines and the use of smart cards to identify voters is those who program the cards and the machines. For something as simple as a data transaction over the internet, this type of security might work well as we have seen with billions of dollars in online transactions. But for counting one person, one vote, this type of security is suspect because of the politics of the programmer or administrator. 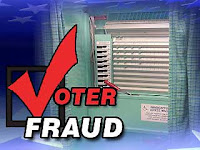 Stealing elections has been commonplace since we have been having them. 2 Timothy 3:16 says, "But evil men and seducers shall wax worse and worse, deceiving and being deceived." There are many of both in the political business. And when the power base of a nation like the United States is on the line, these evildoers will do whatever evil they can to make sure they get the power. Such is the case with electronic voter machines. For example, Clark County, Nevada. The Washington Examiner reports that 75% of Nevada's residents live in Clark County. Democratic Senate Majority Leader Harry Reid's son Rory is a county commissioner and gubernatorial candidate from there. In early voting the machines are automatically checking Harry's name. The voting machine technicians are members of the very left leaning, Service Employees International Union. SEIU gave $500,000 to the group opposing Reid's opponent.

A voter in North Carolina pulled a straight Republican ticket, but the machine selected all Democrats - nine times before it got it right. The Craven County, NC election board said it was aware of "isolated issues" and that eventually voters are able to cast their ballots correctly.

When politicians try to convince you that there is something better than paper ballots, deception is around the corner. There will be upsets November 2. And many will be upset.