The WikiLeaks website last Saturday released the largest cache of secret U.S. documents in history — a diary of 391,832 field reports about the Iraq war between 2004 and 2009. That security tsunami must lead to a number of significant policy changes which have more to do with Washington than Iraq.

A Pentagon spokesman said the leaked reports were pulled from an Iraq-based “tactical reports database” that contained information about “significant activities” such as attacks against coalition troops, civilians and infrastructure.

The consequences for military operations are pretty clear. Pentagon spokesman Col. David Lapan said the leaks put at risk the lives of our troops and especially Iraqis who supported Americans and it raises fears among those who might help in the future. It also gives our enemies sensitive information to mine for our vulnerabilities and could compromise intelligence sources.

But the consequences of this incident go deeper, to the core of the way America deals with the media, government’s control of secrets and foreign affairs policy during wartime. Dramatic changes are warranted.

Some news outlets and cyber radicals like WikiLeaks will publish virtually any material. So-called legitimate media outlets like the New York Times and Germany’s Der Spiegel stooped to the gutter when they cooperated with WikiLeaks to publish the Pentagon’s secret material. Obviously these outlets concluded the risks are low and besides, they self-righteously rationalized the need for states to keep secrets isn’t as important as the public’s right to the information.

Not surprisingly the Pentagon doesn’t share that view. “We deplore WikiLeaks for inducing individuals to break the law, leak classified documents,” Pentagon press secretary Geoff Morrell told Spiegel, “and then cavalierly share that secret information with the world, including our enemies.” 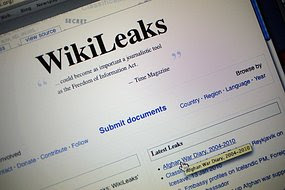 WikiLeaks should pay a high price and complicit American media should not get a free pass either in part because the material is classified but also due to their hypocritical double standard. On one hand newspapers like the New York Times refused in the past to publish anti-Prophet Mohammed cartoons because they might “offend” the Islamic world, but the same icons of political correctness publish Pentagon secrets that endanger our troops.

Our courts long ago declared that yelling “Fire” in a crowded theater is a crime and so should the publication of military secrets that can be used by our enemies to kill our troops. It is time Congress takes a hard look at the boundaries of legitimate journalism and arms law enforcement agencies with the mechanisms to better protect national secrets.

But the responsibility for this problem is shared with government officials. Media outlets like the Washington Post frequently publish articles that source so-called anonymous administration officials who reveal classified information. Apparently those officials don’t understand their oath of office.

Our leaking problem starts with the White House staff. Author Bob Woodward’s new book Obama Wars is filled with White House secrets. It is doubtful Woodward has a key to classified file cabinets in the White House’s executive office building. No, people who should know better passed Woodward reams of highly classified documents that are extensively cited in his book.

The WikiLeaks source was likely someone in the Department of Defense, not the leaky White House. At the center of the controversy is a former intelligence analyst, Army Private Bradley Manning, who is charged with multiple counts of mishandling classified data while in Iraq but he is not as yet charged with the recent leak.

The third consequence of the WikiLeaks incident has to do with the conduct of war and foreign policy. The leaked material evidences three very serious problems which should never have been kept under wraps all these years.

First, the civilian death toll from the Iraq war was always a point of contention but was officially kept secret. U.S. commanders claimed they did not conduct body counts in part to avoid the bitterness associated with that practice during the Vietnam War. However, for credibility reasons, we should have acknowledged the grim civilian toll which was documented by our troops.

The New York Times indicates the military’s 2004-2009 leaked database records 109,032 violent deaths for the period. Most (66,081) were among the civilian population and were killed by other Iraqis. The worst incident took place on August 31, 2005, when a stampede on a bridge in Baghdad killed more than 950 people after attacks panicked the crowd.

The sectarian cleansing — read Iraq’s civil war — was responsible for most of the deaths according to the reports. The worst month was December 2006 with 3,800 civilians killed.

There was civilian blood on American hands as well. The tactical reports reveal incidents in which American soldiers killed civilians in the course of operations, which explains why many Iraqis turned hostile to American forces which likely extended the war.

Second, the Bush Administration used Saddam Hussein’s brutal treatment as one reason to justify the Iraq war but such practices continue today. The leaked reports document significant evidence of torture and mistreatment by Iraqi security forces as recently as 2009. Keeping those incidents secret makes the U.S appear complicit.

The documents don’t address American abuses such as those at Abu Ghraib but focus on abuse carried out by Iraqi security forces. Torture — beatings, burnings and lashings — is described in hundreds of reports, says the New York Times. These incidents were recorded and Iraqi officials were asked to investigate.

But when Americans reported abuse, according to a number of the reports available online, Iraqi officials often ignored the complaint. One report said an Iraqi police chief admitted to American military inspectors that his officers engaged in abuse “and supported it as a method of conducting investigations.”

In August, Iraqi security forces assumed responsibility for their country and if the leaked reports about detainee mistreatment are accurate then abusive investigations will likely continue. We must live with that sad fact and wonder whether keeping the abuse secret really served both nations’ best interests.

Finally, during the war there were reports about Iran undermining coalition efforts. The leaked documents demonstrate Tehran routinely equipped and trained Iraqi militia, and in some cases Iranian agents and soldiers operated inside Iraq killing American forces.

Tehran’s lethal support continued even after President Obama tried to open a dialogue with its leaders, which exposes Iran’s true agenda. Iran’s mad mullahs’ extensive interference in Iraq is part of a grander plan to make Baghdad a piece of Tehran’s Shia crescent that extends across the Middle East to Lebanon. That view was in part validated last week by Iranian President Mahmoud Ahmadinejad’s visit to Beirut where he proclaimed Lebanon a “university of jihad.”

Keeping Tehran’s extensive warmaking activities in Iraq secret hurt our geopolitical interests and aided Iran’s true hegemonic ambitions by failing to expose them to the world.

The WikiLeaks’ security tsunami should be a wake-up call. We need stiff penalties for media and civil servants who compromise national secrets. And our warmaking policy must protect our credibility by acknowledging the tragic loss of life, hold allies and ourselves publicly accountable for detainee abuses, and expose rogue behavior that is obviously linked to broader geopolitical agendas.

Iran Has Been At War With Us For Years - Hot Air