The United States has resisted Iran's nuclear power development. When an enemy calls one's country the "Great Satan" and has repeatedly called for the destruction of one's friend Israel, it makes one uncomfortable for that country to possess anything hotter than a toaster.

After two more months of delays, Iran announced it was finally loading its controversial Bushehr nuclear reactor. Iran had said in August that it would begin loading the fuel rods, but the work was reportedly delayed by a leak. The first 163 fuel rods began being loaded into the core of the first nuclear reactor early Tuesday, much to the concern of Western governments. If all goes as planned, the 1000-megawatt nuclear plant will start producing energy by early 2011.

Normal procedures require IAEA inspectors to oversee the loading of nuclear fuel and to seal the reactor core so that there's no danger of tampering. Iran is supposed to remain subject to IAEA inspections, but Iran has rejected the authority of the IAEA for years. The Iranians have picked and chosen which inspectors they have allowed into the country. 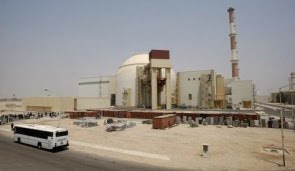 The United States and Israel have been highly concerned about Iran's nuclear power program, believing Iran's pursuit of nuclear energy to be simply a cover for its nuclear weapons aspirations. Russia built the Bushehr reactor for Iran, assuring the world that it would dispose of the spent fuel rods so they would not be available for Iran to use for weapons-grade material.

Iran's ability to enrich uranium, however, is not as great as people may think. According to Dr. Olli Heinonen, a 27-year veteran of the IAEA, Iran has tried to develop most of its nuclear technology on its own. The Iranians bought a Dutch design for their centrifuges from the Pakistanis, but they actually built the machines themselves. They also have a difficult time obtaining raw materials because of sanctions. They may be running thousands of centrifuges, but those centrifuges often operate at a sub-par level.

"The centrifuges are not operating well, and some of them are failing," Heinonen told Haaretz.

"They are losing materials because of this; and so, with this defective equipment, they will have a hard time enriching the material to a level high enough to enable the production of nuclear weapons. They have a lot of problems, and they are not there yet."

Iran's leaders have continued to stand hostile and suspicious, largely rejecting peace with the West. The Obama Administration has continued to make efforts to come to some peaceful terms with Iran, even though the situation often looks impossible. President Obama's special assistant Dennis Ross spoke to attendees of the AIPAC National Summit in Hollywood, Florida on Monday, saying,

"The US government is building leverage through creative and persistent diplomacy to change the behavior of a government insistent on threatening its neighbors, supporting terrorism, and pursuing a nuclear program in violation of its international obligations."

Secretary of State Hillary Clinton: US Has No Problem with Iran's Bushehr Nuclear Reactor - VOA