Juan Williams makes the understandable post-9/11 observation that the sight of Muslims on airplanes makes him nervous, and NPR immediately fires him. Bill O’Reilly states the obvious truth that Muslims attacked the United States on 9/11, and Whoopi Goldberg and Joy Behar walk off the set. These incidents and others demonstrate that the Leftists in the mainstream media and their Islamic supremacist allies are wholly intellectually bereft — and so they cannot engage their opponents on the level of ideas, but must instead bludgeon them into silence.

Examples of this abound. Recently Jeffrey Goldberg in The Atlantic enlisted the help of his friend, Islamic scholar Reuel Gerecht, to attack my colleague Pamela Geller. When I refuted Gerecht’s substantive points about the Koran and Islam, Gerecht did not reply, and Goldberg resorted to posting Internet half-truths, distortions, and outright lies about Geller — again, ignoring her explanations and refutations. Islamic supremacists such as Ahmed Rehab of the Council on American-Islamic Relations (CAIR), a group with numerous ties to Hamas and the Muslim Brotherhood, and Reza Aslan of the National Iranian American Council (NIAC), a group often criticized for its unstinting practice of running interference for Iran’s bloody Islamic regime, traffic in adolescent ridicule and abuse rather than dealing with the real objections their opponents raise.

This general refusal to engage their opposition’s arguments is a sign that the Leftists and Islamic supremacists feel keenly their own intellectual vacuity. They know that in light of it they can do nothing but ignore, mock, or try to bully people who speak the truth. Even the Soviet Union under Stalin was confident enough that its own people were sufficiently cowed, and that it had enough useful idiots among the intelligentsia abroad, that it was able to mount high-profile show trials of dissenters and Stalin’s political rivals in the 1930s.

But by the 1970s and 1980s, the Soviet regime had grown sclerotic, and had lost the assurance that its own people were still terrorized enough to keep silent, or that it could still count on a foreign intelligentsia willfully blind enough to defend the regime. And so instead of mounting flashy show trials, it packed off its opponents to mental hospitals under the cover of darkness. They simply didn’t exist any longer. It was an effective tactic in the short run, as it certainly silenced their opponents of the day; in the long run, it was an expression of exhaustion, an admission of defeat. 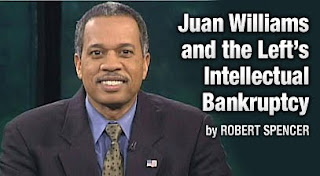 NPR used essentially the same tactic on Juan Williams: it declared his opinions beyond the pale of decent people and cast him out of polite society, into the outer darkness inhabited by Fox News, far from the politically correct fold. NPR apparently did not anticipate the fury of the American people at the public station’s bullying and refusal to countenance reality. Goldberg and Behar tried the same tactic with Bill O’Reilly: in walking off the stage, they were actually banishing him, along with his claim — as obvious to most Americans as it was outrageous to them — that Muslims killed Americans on 9/11. This is likewise what Jeffrey Goldberg and others who have tried to do to Pamela Geller: render her so radioactive through misrepresentation of what she has said that decent people will turn away.

As they practice these tactics, the implicit admission rings louder and clearer all the time: they have no arguments. They can’t really explain why Juan Williams should not be nervous at the sight of Muslims on an airplane. They have no idea how to answer O’Reilly’s follow-up question that if it wasn’t Muslims who killed us on 9/11, then who was it? And they have no comeback to the arguments from reason, decency, common sense and history that Pamela Geller has adduced against the Ground Zero mosque, and so instead of acknowledging these arguments they try to destroy her personally.

The Leftists who control the media and the Islamic supremacists of whom they provide fawning and mendacious coverage cannot defeat their opponents. They are exhausted. They are finished. The only weapons they have left are feigned moral outrage, defamation, and smear.

And the American people know it. The downfall of the media elite is on the horizon.